The Bengals have agreed to terms Daxton Hill (Twitter link via NFL.com’s Ian Rapoport). The Michigan defensive back is expected to put pen to paper today, making it all official. 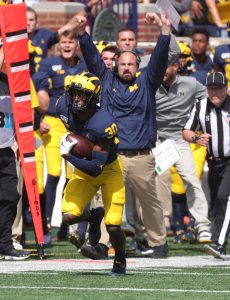 Hill was viewed as the consensus second-best safety prospect heading into the draft, behind only Notre Dame’s Kyle Hamilton. After the Ravens nabbed Hamilton at No. 14 overall, the Bengals came in to pounds towards the end of Round 1. Many anticipated that Hill would still be on the board to start Day 2, but the Bengals weren’t willing to risk it.

Hill’s versatility is viewed as a major plus — he could see time at free safety, strong safety safety, or even reps as a slot receiver. On the defensive side, Hill notched 69 tackles for the Wolverines last year, including 4.5 tackles for loss and half a sack. He also nabbed eight passes defensed and two interceptions, giving him four picks across his three seasons.

In accordance with his slot, the No. 31 overall pick will earn $13MM over the course of his four-year rookie contract. This year, he’ll start with a modest $705K base salary and carry a $2.4MM cap figure. His salary will escalate over the life of the deal, ending with a $4.2MM cap charge in 2025. Of course, by then, the Bengals will reserve the right to keep him for ’26 via the fifth-year option.