OCTOBER 26: McDaniel is now ruling Jones out for the season. Miami’s first-year HC said Jones suffered an ACL tear. The former third-round pick will not return until 2023, the final year of his rookie contract.

OCTOBER 24: It’s looking like the Dolphins will be without starting safety Brandon Jones for an extended period of time as he heads to the injured reserve list, according to Barry Jackson of the Miami Herald. Jones suffered a knee injury in the third quarter of the team’s win over the Steelers Sunday night, and the prognosis is not encouraging.

Jones took over the starting strong safety job last season and has been a reliable presence in the Miami secondary ever since. He provides a versatility that has become very popular for safeties in today’s game. As a starter last season, Jones was able to accumulate 5.0 sacks, 6.0 tackles for loss, and 10 quarterback hits. He’s shown more physical ability than coverage ability over his first three years in the league with only one interception but three forced fumbles so far in his career, but he showed an improvement in coverage so far this year racking up a career-high three passes defensed through only seven games.

Jones heading to IR means he’ll miss at least four games, but head coach Mike McDaniel‘s comments make it seem like the Dolphins will be without Jones for longer than that. When asked about the issue, McDaniel explained, “There is some lingering college stuff that is complicating the issue. I’m not excited about it.” McDaniel went on to say that he was “hesitant to rule (Jones) out for the year” until they were able to get more information, but the fact that a season-ending injury is on the table is a scary prospect for Miami.

Jones going down just adds to the list of injuries the Dolphins have been dealing with this season on both sides of the ball but in the secondary, particularly. Obviously, the injury to quarterback Tua Tagovailoa has been receiving most of the conversation this year, but the secondary in Miami has been dealing with several bumps and bruises.

While the Dolphins are happy to have Xavien Howard and Noah Igbinoghene leading the cornerback group, the team’s depth at the position has suffered. Byron Jones has been on the reserve/physically unable to perform list all year and Nik Needham is set to miss the rest of the season after tearing his Achilles tendon last week. Keion Crossen and undrafted rookie Kader Kohou have also missed a couple of games lately.

In Jones’ absence last night, the Dolphins split safety snaps between backups Eric Rowe and Clayton Fejedelem and practice squad callup Verone McKinley. The team will search for a long-term solution to replace Jones this week, but, if the team isn’t impressed with what Rowe, Fejedelem, or McKinley have to offer, they may be forced to make a last-second move before the trade deadline.

Teams still have about 31 hours to trim their rosters to 75 players, and the Chiefs are getting an early start on the process by releasing nine players this morning, the team announced in a press release. Kansas City also placed second-year safety Sanders Commings on injured reserve, ending his season.

Former Jets running back Mike Goodson was a no-show at his scheduled court appearance on Thursday. Goodson was set to appear at Morris County Superior Court in New Jersey on drug and weapon charges.

As Darryl Slater of The Star-Ledger reports, the player’s attorney, Alfred Gellene, said that Smart was unable to land a flight from Texas because of financial difficulties. ESPNNewYork.com’s Jane McManus adds that Goodson faces up to ten years in prison if found guilty on the weapon charges and could also be arrested if he fails to attend his July 24th hearing.

About a week ago, some of Goodson’s former Jets teammates expressed their concern for the player’s well-being. No one in the organization had heard from the 27-year-old throughout minicamp.

WEDNESDAY, 3:30pm: The Chargers have waived cornerback Brandon Jones in order to clear a spot on the roster for Flowers, the team announced today (Twitter link).

TUESDAY, 6:24pm: Field Yates of ESPN.com (Twitter link) has the exact breakdown of Flowers’ deal. The veteran gets $1.5MM to sign, $1.5MM in base salary, and up to $2MM in incentives. In order to earn that full $2MM in incentives, Flowers needs to play in 92.5% of the Chargers defensive snaps and the team must advance to the AFC Championship (link).

5:53pm: Flowers’ deal can earn him up to $5MM, tweets Ian Rapoport of NFL Network. The cornerback will now have the opportunity to prove himself this season and cash in next offseason at the age of 29.

4:01pm: The Chargers have reached an agreement on a contract with free agent cornerback Brandon Flowers, reports Jason La Canfora of CBSSports.com (via Twitter). According to Mike Garafolo of Fox Sports (Twitter link), it’ll be a one-year pact for Flowers in San Diego. 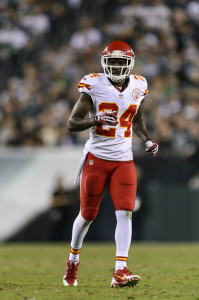 After being cut by the Chiefs earlier in the month, Flowers paid a free agent visit to the Chargers last week, and later met with the 49ers as well, according to Garafolo (Twitter link). By joining the Chargers, Flowers will remain in the AFC West and face his old team twice in the 2014 season, and will also be signing with the team that topped last week’s PFR poll asking where the cornerback would land.

Pro Football Focus’ advanced metrics (subscription required) suggest 2013 was a down year for Flowers as he struggled to fit in new Kansas City defensive coordinator Bob Sutton’s scheme, ranking as just the 87th-best CB in the league among 110 qualified players. However, PFF rated Flowers as a top-seven corner in both 2011 and 2012, and the former Chief is still only 28 years old. That makes him an intriguing option for a Chargers team whose corners all had even worse PFF grades than Flowers in ’13.

By signing a one-year contract with San Diego, Flowers will have the opportunity to show that 2013 was an aberration, and will be eligible to hit the open market again at age 29. Considering the kind of deals we saw this year’s group of top cornerbacks sign in free agency, a bounce-back year from the former Virginia Tech standout could result in another nice payday next March. It would also go a long way toward solidifying a Chargers secondary that also added first-round cornerback Jason Verrett.

The Vikings, Ravens, Falcons, and Lions were among the other clubs who reportedly had some level of interest in Flowers, who received inquiries from about 10 teams when he first became available. However, if those teams – and others – are still on the lookout for veteran cornerback help, they’ll have to turn to a group of free agents that looks significantly less appealing without Flowers heading it up. Chris Houston, Terrell Thomas, and Drayton Florence are among the players still available, as our list of FAs shows.

The Chargers filled the 90th and final spot on their roster last week by claiming Chas Alecxih off waivers, so they’ll have to make a corresponding move in order to officially add Flowers.