Reserve/futures deals as we head into the weekend:

Signed in the wake of the Patriots poaching Davon Godchaux, Adam Butler is no longer with the Dolphins. The former Patriot received his walking papers Tuesday. 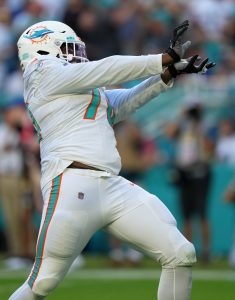 A failed physical designation came with the release. The Dolphins signed Butler to a two-year, $7.5MM deal in 2021. With no money being guaranteed in Year 2, the team will save $4.15MM with this transaction.

Butler logged a career-high 53% snap rate last season. Despite being used mostly as a rotational player, Butler’s 591 snaps marked a 100-plus-play increase on his single-season Patriots usage. Although Butler played in all 17 games, his production dipped in Miami.

Butler, 28, tallied two sacks and a career-low 17 tackles. His two tackles for loss also matched a career-low figure. Pro Football Focus rated Butler outside the top 70 among interior D-linemen. The Dolphins did not use any draft choices on their defensive line but did sign veteran John Jenkins this offseason.

A former UDFA, Butler recorded 10 sacks in his final two New England seasons. Prior to that, he worked as a regular up front for two Super Bowl-bound New England teams. He registered sacks against the Titans and Jaguars as a rookie during the Pats’ AFC playoff run. Butler worked under Brian Flores during his Patriots tenure. Although the Dolphins did not change defensive coordinators upon firing Flores, with Josh Boyer staying in place, one of Flores’ two-city charges is out of the picture.

Adam Butler will reunite with Brian Flores. The former Patriots defensive tackle has agreed to a two-year deal with the Dolphins (Twitter link via NFL.com’s Ian Rapoport). The contract could be worth up to $9.5MM with bonuses. Aaron Wilson of the Houston Chronicle tweets that the contract has a listed value of $7.5MM, including $3.75MM in guaranteed.

Last year, the Patriots kept Butler from the open market (and, likely, the waiting arms of Flores) with a second-round tender. This time around, the Patriots allowed Butler to walk amidst their own free agency spending spree.

The former Vanderbilt standout has spent his entire four-year career with New England, and he won a Super Bowl championship during his second year in the NFL. He’s missed just one a regular season game as a pro and he’s made an impact, despite making just six combined starts across the last two seasons. In 2019, he set a new career high with six sacks. Last year, he registered four sacks with a new watermark of 34 total stops.

Butler will be joined in the Miami front seven by fellow newcomer Benardrick McKinney. The Dolphins acquired the inside linebacker earlier this week by shipping OLB Shaq Lawson to the Texans.

The Patriots are making (somewhat) of a commitment to defensive tackle Adam Butler. ESPN’s Mike Reiss reports (via Twitter) that the team has placed a second-round tender on the 25-year-old.

The move ensures that if any team signs Butler to an offer sheet and the Patriots decline to match, they’d get that team’s second-round pick in return.

The former Vanderbilt standout has spent his entire three-year career with New England, and he won a Super Bowl championship during his second year in the NFL. Butler hasn’t missed a regular season game since entering the league, and he set career-highs in tackles (26) and sacks (six) last season.

Along with the previously reported signings of BYU linebacker Harvey Langi and Central Florida defensive back D.J. Killings, the Patriots announced 17 other undrafted free agent pickups Friday. Here they are: