More clarity arrived regarding Vikings long snapper Austin Cutting‘s status recently, and the seventh-round pick agreed to terms on his rookie deal, according to Chris Tomasson of the St. Paul Pioneer Press (on Twitter).

Cutting’s commitment to the Air Force Academy had left his status in limbo for a while this offseason, but he has been cleared to play. This marks the last of 2019’s Day 3 draft choices to agree to the terms of his rookie contract. Cutting’s deal is for four years and $2.59MM.

Cutting will serve a two-year military commitment but will be allowed to play for the Vikings, with Tomasson tweeting the arrangement will allow the Air Force product to live in Minnesota during that time. Cutting will serve as a first-year recruiting lieutenant, Nicki Jhabvala of The Athletic tweets.

It is not a given this year’s No. 250 overall pick will make Minnesota’s roster, despite being the rare long snapper draft choice. Kevin McDermott has served as the Vikings’ deep snapper since 2015. McDermott, 29, is signed through 2020.

Vikings rookie long snapper Austin Cutting has been cleared to play in the NFL, according to Chris Tomasson of the Pioneer Press. Previously, the seventh-round pick’s status was up in the air due to his commitment to the Air Force Academy. 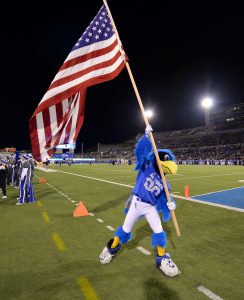 Cutting, taken with the No. 250 overall pick, is expected to sign a four-year, $2.59MM contract with the team, including a $74K signing bonus. With a deal in hand, he’ll start training camp early next week with the other Vikings rookies.

Unsurprisingly, Cutting was the lone unsigned seventh-round pick in the NFL. Once he signs, there will be just seven stragglers left in the league.

The Vikings made a splash last week in the draft, when they took Alabama tight end Irv Smith Jr. 50th overall. Smith was considered by many to be the third best tight end in the draft behind the Iowa standouts, and the Vikings are hoping he can turn into a consistent third option behind Stefon Diggs and Adam Thielen in the future. But the move could have more immediate implications for one current member of the team, tight end Kyle Rudolph. The selection “appeared to foreshadow that Rudolph’s days in Minnesota could be numbered,” writes Courtney Cronin of ESPN.com.

Additionally, sources told Cronin that the Vikings “fielded interest” before and during the draft about a potential trade for Rudolph. We heard in March that the Vikings had asked Rudolph to take a pay cut, but his representatives then pushed back forcefully on that and denied the report. His reps also said at the time that the team had told them Rudolph would be on the roster in 2019, but that’s looking like far from a sure thing now. Last month Albert Breer of SI.com speculated that the Patriots could be interested in adding Rudolph. With New England looking thin at tight end after Rob Gronkowski’s retirement, it wouldn’t be a shocker.