The Buccaneers and defensive end Jason Pierre-Paul have agreed to a revised deal that will make him a free agent after the 2019 season, rather than 2020, Field Yates of ESPN.com tweets. The revision will clear $4.4MM in cap space for Tampa Bay and JPP will receive upwards of $10MM in exchange. 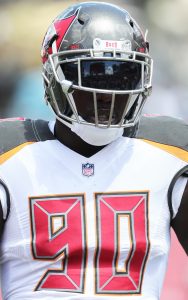 An unfortunate car accident in the spring landed JPP on the league’s NFI list, meaning that he cannot play for the first six weeks of his season. His outlook beyond that for 2019 remains murky, though he did begin rehab in late August.

While on the NFI list, teams are not obligated to pay a player’s salary. However, JPP’s deal still called for a $7.5MM injury guarantee for 2019 with a total cap figure of $14.9MM.

Under the terms of the new deal, JPP will have an opportunity to make up to $10.5MM, with a base salary of $5MM. And, he’ll have a path to the open market in March, where he could land a decent-sized deal based on his past performance. In 2018, Pierre-Paul amassed 12.5 sacks on the Bucs’ defensive front, matching the second-highest showing of his career.

After losing to JPP’s former club in heartbreaking fashion on Sunday, the Bucs will turn their attention to the Rams this weekend.