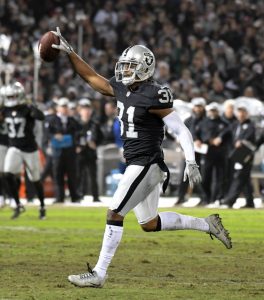 The Jaguars added a pair of linebackers on Wednesday. The team agreed to terms with former Rams and Chiefs linebacker Ramik Wilson as well as Najee Goode, who spent last season with the Colts after five years with the Eagles. 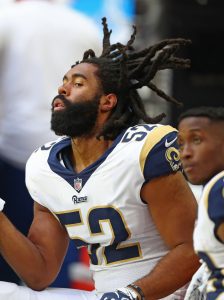 Wilson, 27 in August, appeared in all 16 regular season games for the Rams, notching 35 tackles, one forced fumble, and one fumble recovery. Although he spent much of the 2016 season as a starter for the Chiefs, he’s primarily been used as a backup throughout his career, which is likely how both he and Goode will fit in with Jacksonville.

Goode, 30 in June, entered the league as a fifth-round pick of the Bucs in 2012, but only appeared in three games for them as a rookie. After that, he became a supporting linebacker and special teamer for the Eagles.

The Colts announced that they have signed linebacker Najee Goode. Goode spent the last five years with the Eagles. 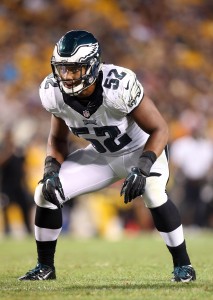 Goode has 64 career appearances to his credit, not counting four postseason games, but only four starts. He also projects to serve in a reserve role for the Colts.

Goode saw the most snaps of his career in 2017 as he registered 19 tackles (12 solo) and three tackles for loss. He also started in the NFC Championship Game for the eventual world champs.

The Colts saw linebackers Jonathan Bostic and Barkevous Mingo leave in free agency, so Goode will help to fill one of those holes. John Simon and Antonio Morrison figure to start at two of the three LB spots in the Colts’ 4-3 scheme and they’re expected to look at outside linebackers in this month’s draft.

The Eagles will re-sign linebacker Najee Goode to a one-year deal, reports Dan Graziano of ESPN.com. The pact is worth $875K, per Jason Fitzgerald of Over the Cap, and contains a $50K signing bonus and a $50K workout bonus.

Goode, 26, is almost exclusively a special teams player. In 2016, he played all of two defensive snaps, but did see time on more than two-thirds of the Eagles’ special teams plays. Although he’s spent the past four years in Philadelphia, 2016 marked the first season in which Goode appeared in all 16 games. Originally a fifth-round pick of the Buccaneers, Goode has played in 48 games during his five-year NFL career.

The Eagles re-signed Goode to a one-year pact last offseason, as well, and although he was released at final cutdowns, Goode re-upped with Philadelphia before the club’s first regular season contest.

The Eagles roster is now at 53 after the organization brought back a key special teams player. According to ESPN’s Tim McManus (via Twitter), the team has re-signed linebacker Najee Goode. The 27-year-old was cut by the organization last week.

Goode, a former fifth-round pick out of West Virginia, has been with the Eagles since 2013. The linebacker has appeared in 29 games through his three seasons with the organization, though he missed the majority of the 2014 campaign with an injured pectoral muscle. In his career, Goode has compiled 32 tackles, one sack, and four passes defended. Goode has also established himself as a main contributor to the Eagles’ special teams unit.

Goode was also cut by the Eagles during last season’s preseason, but he rejoined the team in late September. The linebacker actually inked a one-year extension back in February, but that was likely thrown out following his release by the team last week.

After seeing a pair of inside linebackers go down with injuries on Sunday against the Cowboys, the Eagles have brought back one who was with them in the past, announcing today that they’ve re-signed Najee Goode. The club cut offensive lineman Julian Vandervelde to create room on the roster for Goode.

Goode, 25, was originally a fifth-round pick by the Buccaneers in 2012, but he has seen most of his NFL action for the Eagles, appearing in 14 games for the club in 2013. The West Virginia product was among the last players let go by Philadelphia before the 2015 season began, as he was waived during the team’s cutdown to 53 players.

While Mychal Kendricks‘ injury isn’t believed to be serious, it appears Kiko Alonso could be sidelined for a significant period after suffering a partial tear of his left ACL on Sunday. Alonso is getting a second opinion from Dr. James Andrews today and the Eagles figure to determine a course of action and a recovery timetable for him after that.

In the meantime, Goode should help provide depth on the inside for Philadelphia’s linebacking corps.