Reuben Foster‘s ex-girlfriend admitted that she falsely recanted her allegations of abuse earlier this year in an effort to protect the linebacker. In an interview with ABC, Elissa Ennis explained that she helped get the charges dropped against Foster in order to keep him out of prison and continue their relationship. 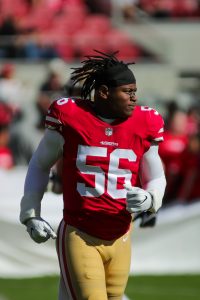 “Love will have you doing things that’s not in your best interests,” she said (via ESPN.com) “I did what I had to do for the person I love. I thought that he would change.”

Ennis also claims the 49ers tried to intervene during Foster’s arrest last month. When police arrived to the team hotel, she alleges that people from the 49ers told cops she was the same woman who previously recanted allegations against Foster. It’s not immediately clear whether Ennis is alleging interference from players or other team staffers.

During the interview, Foster’s ex-girlfriend described a pattern of abuse between her and Foster. On at least three different occasions, she says, she was punched and kicked by the former first round pick.

The 49ers released Foster soon after the November arrest and the Redskins claimed him off waivers. Foster was placed on the commissioner’s exempt list (paid suspension) while the legal process plays out, so he is unlikely to suit up for Washington this year.

24 comments on “Latest On Reuben Foster”