Broncos rookie running back Phillip Lindsay‘s season came to an end on Monday, as tests revealed he suffered ligament damage in his injured wrist vs. the Raiders, the NFL Network’s Ian Rapoport tweets. In addition to missing the season finale, Lindsay will also likely be sidelined for the Pro Bowl. 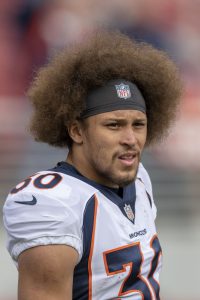 The damage to the ligaments are described as significant, and he will receive a second opinion on a possible scaphoid fracture according to 9News’ Mike Klis (Twitter link). The duration for his recovery has not been outlined but is expected to be a lengthy one, as surgery is likely.

“I was just going through a play and it got hit and it just got numb a little bit,” Lindsay said. “They took precaution and felt that I should stay out … they decided it was probably smart for me to sit out.”

It’s a crushing blow for Lindsay, who became the first undrafted rookie offensive player to be selected to the Pro Bowl after rushing for 1,037 yards and nine touchdowns in 2018. After splitting carries as a change-of-pace back early in the season, the Colorado product moved into a prominent role with his first start in Week 8 and held the role through Week 16. He finished the season with three 100-yard rushing efforts and touchdown runs in six of his final nine games.

One of the league’s best bargains, Lindsay is signed through the 2020 season at a total remaining salary of $1.2MM.

9 comments on “Phillip Lindsay Has Ligament Damage In Wrist”