The Jets will meet with free agent quarterback Josh McCown on Friday and Saturday, tweets Ian Rapoport of NFL.com, who reported earlier this week Gang Green had reached out to McCown. 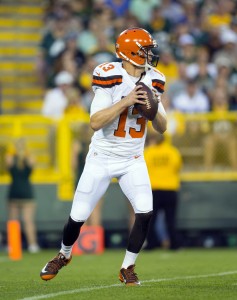 McCown is now entering his age-38 season and hasn’t been able to stay healthy in recent seasons, but he’d be able to give the Jets some level of competency at the quarterback position. Geno Smith, who may have been an option for New York, signed with the crosstown rival Giants earlier today. The Jets have also been linked to free agent Jay Cutler and a host of draft prospects as they seek to upgrade under center.

Appearing in five games (three starts) for the Browns in 2016, McCown completed 54.5% of his attempts for 1,100 yards, six touchdowns, and six interceptions. He’s also drawn interest from the Cowboys this offseason, and took a visit to Dallas earlier this month.