Rex Ryan says he still has interest in coaching, but he won’t be on the sidelines in 2017. The former Jets and Bills head coach has signed a multi-year deal to be on ESPN’s Sunday NFL Countdown, according to Manish Mehta of the New York Daily News. 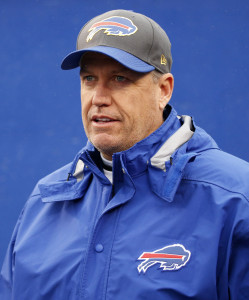 Ryan first auditioned for the gig when he served as a guest analyst on Super Bowl Sunday. As one of the most colorful personalities in the game, he was a natural fit for the job. In January, even as Ryan said that he still had an itch to coach, he admitted that he had interest in a broadcasting career.

“The one thing about (being on TV) is that you don’t lose,” Ryan said. “You’ll remember every damn loss. But the wins? You don’t necessarily remember. So, it takes a lot out of you. I’m tired of getting f—ked. Unless it’s a real situation, there’s no sense of getting into it again.”

In that January interview, Ryan said he is interested “at all” in a defensive coordinator job “at this time.” Of course, after washing out in Buffalo, he wasn’t a viable candidate for any NFL head coaching position. Interestingly, he did not rule out returning to the Jets someday in some capacity.