When Rex Ryan was hired as the coach of the Bills, he said that Buffalo would be his final stop as a head coach. Two years later, he’s out of a job, but he’s not necessarily ruling out a return to a head coaching gig if he gets the right opportunity, Manish Mehta of the New York Daily News writes. 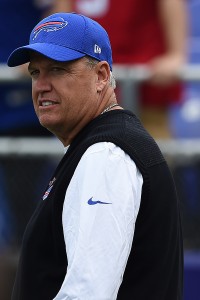 “The one thing about (being on TV) is that you don’t lose,” Ryan said. “You’ll remember every damn loss. But the wins? You don’t necessarily remember. So, it takes a lot out of you. I’m tired of getting f—ked. Unless it’s a real situation, there’s no sense of getting into it again.”

After being discarded by Buffalo, Ryan appears to be a better defensive coordinator candidate than a head coaching possibility. Despite that, Ryan says he is not interested “at all” in a DC job “at this time.”

Interestingly, Ryan says that he would not close the door on someday returning to the Jets in some capacity. Coach Todd Bowles has been retained for a third season, but as Mehta notes, there’s no telling what Woody Johnson could do in 2017 if things do not go according to plan.

In the meantime, Ryan says he’ll do some television work. His next assignment will have him serving as a panelist on ESPN for Super Bowl weekend.