The Cowboys are looking into finding a backup quarterback for Dak Prescott. Of course, they already have a No. 2 QB, but he might not be around for much longer. The Cowboys are hosting Josh Mccown on a visit today, according to a source who spoke with Adam Schefter of ESPN.com (on Twitter). 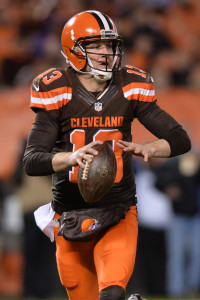 For a while now, there has been talk of mutual interest between Dallas and the veteran signal caller. McCown will turn 38 in July and he certainly has the experience to hold down the fort, if necessary, and also help to mentor Prescott. Unlike Tony Romo, he’s at a point in his career where it makes sense to take on a backup role for a winning club.

McCown made five appearances (three starts) with the Browns last year as he battled injuries. In that small sample, he completed 54.5% of his passes, averaged 6.7 yards per attempt, and threw six touchdowns against six picks. I have McCown listed as one of the ten best quarterbacks available in free agency this week.

Speaking of Romo, here’s the latest on him: He wants to join the Broncos, the Texans‘ front office is split on him, and the Chiefs are not among the clubs with interest.