The Giants are expected to sign former Jets quarterback Geno Smith, according to Adam Schefter and Jordan Raanan of ESPN.com (on Twitter). The deal will reunite Smith and wide receiver Brandon Marshall. It’s a one-year deal worth about $2MM, Ian Rapoport of NFL.com tweets. 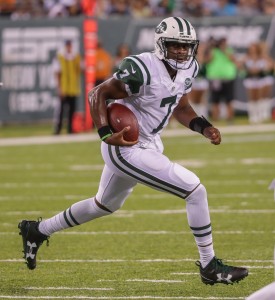 Smith, 26, started one game for the Jets in 2016, but tore his ACL in that October contest and missed the remainder of the season. The former second-round pick has only attempted 56 passes over the past two years.

On Friday morning, the Giants re-signed quarterback Josh Johnson. Right now, it seems like the plan will be for the Giants to have Smith as Eli Manning‘s primary backup with Johnson in the QB3 spot. Of course, a lot can change over the next seven months and Johnson’s place on the roster isn’t a certainty. The Giants could still draft a developmental quarterback to give them another candidate to be Eli’s heir and depending on that QB’s stature, that player could even usurp Smith’s place as the primary understudy.

Smith, of course, has some unpleasant memories in East Rutherford, New Jersey. But, to his credit, he’ll face those nightmares head on and attempt to exorcise those demons in a new uniform.

Smith was PFR’s No. 14 ranked free agent quarterback heading into free agency. Reportedly, the Jets were still open to a reunion if they were unable to find a better option. The Chargers and Browns also had interest.