The Browns’ season will continue. Unfortunately, for Olivier Vernon, the season is over. The defensive end has torn his Achilles, head coach Kevin Stefanski announced. 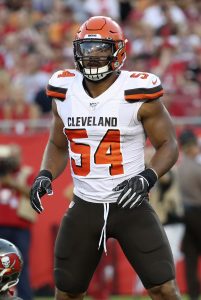 The veteran went down late in the season finale and had to be helped off the field. After a sideline check, he was carted to the locker room, signaling something serious. Vernon is now set for surgery and an uncertain future. He’ll be an unrestricted free agent in March, thanks to the reworking of his deal that bars the Browns from tagging him.

Vernon posted just 3.5 sacks in 2019, but the advanced metrics were fairly fond of his work. And, before Vernon came to Cleveland, he managed 22 sacks over the course of three years with the Giants, despite a good deal of missed games. This year, he stepped up things up with nine sacks, his highest posting since 2013. He’s been red hot too — all of his sacks came after Week 8.

With the Steelers on the horizon, the Browns will be banking even more on star Myles Garrett for pressure on the edge.

Browns Were In Serious Talks For Yannick Ngakoue

The Jaguars have finally traded Yannick Ngakoue, shipping him to the Vikings in exchange for a 2021 second-round pick and a conditional fifth-rounder in 2022. But before that happened, Jacksonville and the Browns were engaged in serious trade talks, as Mary Kay Cabot of Cleveland.com reports.

The Browns were mentioned as a potential suitor for Ngakoue this offseason, but until now, there were no concrete reports concerning Cleveland’s interest. Per Cabot, the fact that Ngakoue was dealing with a change in representation during the trade negotiations threw a wrench in the works, and by the time his agency situation was settled, the July 15 deadline for extending franchise-tagged players had passed. While the Browns may have been willing to part with the same draft capital that the Vikings did to land Ngakoue, his status as a potential one-year rental made them less inclined to do so.

However, Ngakoue “really wanted” to play for the Browns, according to Cabot’s sources. The 2016 third-rounder accepted a significant pay cut from his $17.8MM franchise tag number to facilitate his trade to Minnesota, and Cabot says he may have been willing to drop his 2020 salary even more for Cleveland.

But the Browns ultimately elected to move forward with Olivier Vernon, reworking his deal to turn his $15.25MM non-guaranteed pact into $11MM guaranteed with the potential to earn an additional $2MM via incentives. When that happened, it made an Ngakoue trade (or a Jadeveon Clowney signing) much less likely.

Cabot says that Vernon is in the midst of a terrific training camp, and the Browns fully believe that he and Myles Garrett will form an imposing pass rush duo in 2020. Ngakoue obviously has considerably more long-term upside than Vernon, so time will tell if Cleveland — which still has a lot of salary cap space — made the right call.

The Browns have entered the enduring Jadeveon Clowney sweepstakes. Not only is Cleveland now involved in the Clowney pursuit, Jeremy Fowler of ESPN.com reports some around the league believe the Browns have come closer to a Clowney deal than other suitors thus far (Twitter link).

The Seahawks have been the team most closely connected to Clowney this offseason. While Seattle has tried to make a viable offer to keep the three-time Pro Bowler, Fowler adds that the team’s offer has not satisfied the Clowney camp to this point.

A Clowney-Browns scenario would be interesting given the team’s defensive end depth. The Browns already employ Myles Garrett and Olivier Vernon. A Clowney deal would point to Vernon being on the outs.

In late February, Vernon was linked to being a candidate for a pay cut or release. In the final year of his Giants-constructed contract, the veteran defensive end is set to earn $15.25MM. The Browns are not expected to pay him this much, but the former Dolphins and Giants pass rusher remains on the roster. The Browns have shopped Vernon, Nate Ulrich of the Akron Beacon Journal adds, but any deal would likely be contingent on Cleveland picking up some of his salary.

This week, both the Jets and Titans re-emerged as Clowney suitors. The former No. 1 overall pick also dropped his price off the $20MM-per-year mark. However, the Seahawks’ proposal likely lands between $13-$15MM per year.