Chiefs defensive end Frank Clark was arrested in Los Angeles last night and charged with felony possession of a concealed firearm. The news was first reported by TMZ.com and has since been confirmed by the Los Angeles Police Department (to NFL.com). 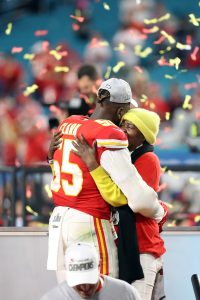 Clark was originally pulled over for a vehicle code violation. Officers noticed that a bag inside of the vehicle was holding an Uzi, and the NFL player was subsequently arrested. Clark was in police custody for more than 12 hours before posting $35K bond and being granted his release this afternoon.

Per NFL.com, Clark’s next court date is scheduled for October 18. The arrest could fall under the NFL’s Personal Conduct Policy, which could lead to punishment for the veteran defender.

After spending the first four seasons of his career with the Seahawks, Clark joined the Chiefs via trade in 2019. Since joining Kansas City, the defensive lineman has earned a pair of Pro Bowl nods while collecting 14 sacks, 66 tackles, and 29 QB hits in 29 games (26 starts). Clark has also come up big during each of the Chiefs’ last two playoff runs, collecting eight sacks in six games. The 28-year-old reworked his deal earlier this offseason, providing the team some extra wiggle room while converting $5MM of his base salary into a signing bonus.