Packers Inquire On Texans’ Will Fuller

The Packers are among the clubs showing interest in Texans wide receiver Will Fuller, according to Aaron Reiss of The Athletic 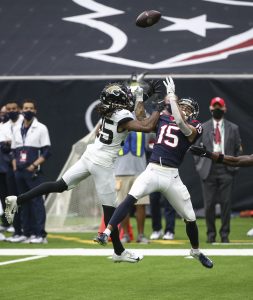 (on Twitter). Nothing is imminent at the moment, but things could pick up between now and Tuesday’s trade deadline.

Reiss also hears that the Texans are not interested in a full-on fire sale, though many observers are skeptical. Their firing of head coach/GM Bill O’Brien seemed to signal the start of a revamp, and they’re not playing for much this year with a record of 1-6. They’re also in the midst of their bye week, which would give them extra time to acclimate post-trade.

Fuller, who is playing on a $10.16MM fifth-year option salary, profiles as an interesting rental option for contenders. Through seven games, he’s been Deshaun Watson‘s favorite target, catching 31 passes for a team-high 490 yards and five touchdowns. The Texans could parlay Fuller into draft capital, but they seem to be telling teams that they’d rather keep him (and Brandin Cooks) for the long haul. For what it’s worth, interim head coach Romeo Crennel has been telling players not to worry about getting traded.

“With this situation, it might be more on their mind this year,” Crennel said when asked if the issue is a potential distraction. “I’ve talked to them and tried to reassure them that I’m not looking to trade guys.”

15 comments on “Packers Inquire On Texans’ Will Fuller”