Justin Houston stands as one of the best free agents left unsigned. A door still appears open for Houston to return to the Colts, but they now have competition. The Ravens are set to meet with the veteran edge rusher next week, Jason La Canfora of CBS Sports tweets. 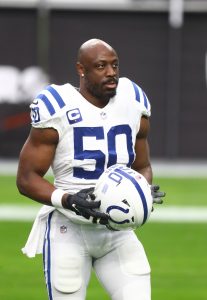 It sounds like the Ravens will take an in-depth look at this need area. They plan to bring in more pass rushers on visits soon, according to The Athletic’s Jeff Zrebiec (on Twitter). The market also features the likes of Jadeveon Clowney, Ryan Kerrigan, Melvin Ingram, Aldon Smith and Everson Griffen. Some of these unsigned talents may be on track for Ravens visits.

The Ravens taking a long look here certainly adds up. They lost their top two edge players last month, with Matt Judon signing with the Patriots and Yannick Ngakoue joining the Raiders. Baltimore did re-sign Pernell McPhee yet again, and the team also kept Tyus Bowser. While former mid-major sack standout Jaylon Ferguson also remains on the Ravens’ roster, it is possible the team is looking for multiple starters.

Houston, 32, spent the past two seasons in Indianapolis. The former Chiefs Pro Bowler managed to both stay healthy and serve as the Colts’ top outside rusher, compiling 19 sacks in two Indy seasons. A recent report indicated the Colts have remained in contact with Houston. They have company now. While Houston dealt with injuries for much of his second Chiefs contract, he did not miss a game as a Colt. The 10-year veteran has four double-digit sack seasons on his resume, which is topped by the virtuoso 22-sack effort from 2014.

The market remains fairly deep at this position, at least among older vets seeking third contracts. Kerrigan played out his second Washington deal, doing so after seeing the team draft edges with its two most recent first-round picks. Ingram’s push for a third Chargers deal did not come to fruition. Ingram visited the Chiefs recently, while the Bengals brought in Kerrigan. After seeing Montez Sweat and Chase Young relegate him to a bench role for much of last season, Washington’s all-time sack leader wants to be a starter again in 2021.

Clowney emerged on the Ravens’ radar last year, but with free agents unable to visit teams throughout the 2020 offseason, he ended up taking a one-year Titans deal late last summer. After struggling in Tennessee and dealing with more injury trouble, Clowney’s price tag has dropped. The former No. 1 overall pick has visited the Browns and is expecting to be cleared for full football work this month.