Titans’ Jadeveon Clowney Expects To Be Cleared In April

Jadeveon Clowney expects full medical clearance by April, according to NFL.com’s Ian Rapoport (on Twitter). Clowney underwent surgery to repair his torn meniscus but already believes that he’s close to being ready. 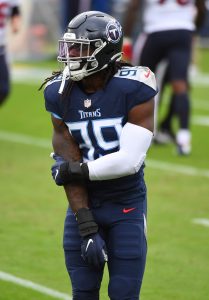 In other words, this is shaping up to be another extended free agency tilt for the Titans edge rusher. Last year, his knee kept him on the sidelines for half of the season. In eight games, Clowney notched 19 tackles, one forced fumble, and zero sacks.

Clowney has said that he wouldn’t mind staying with the Titans. Whether the Titans want him back is another question. The veteran did not live up to his one-year, $12MM deal, though the former No. 1 overall pick isn’t far removed from Pro Bowl days. From 2016 through 2018, Clowney averaged 8.2 sacks and two forced fumbles per season, solidifying him as one of the best edge rushers in the game. Of course, injuries have gotten in the way — he’s only turned in one full 16-game slate as a pro.

Despite the weak platform year, it’s worth noting that the advanced metrics were still fond of his work. At the time of his season-ending injury, Pro Football Focus ranked him as the 16th-best edge player in the league. PFF also gave him above-average marks in both run defense and pass coverage.