Vikings linebacker Cameron Smith will opt not to pursue another NFL season, instead announcing his retirement (Instagram link) Wednesday night. This comes after the young defender underwent open-heart surgery in 2020. 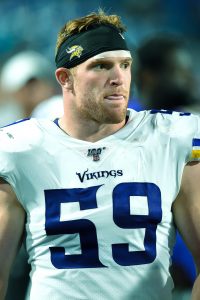 A COVID-19 test last summer revealed Smith needed the operation, which ended his season before it started. Although Smith went forward with a procedure that would allow him to continue his NFL career, he will retire nearly a year later.

Smith returned from the surgery and was cleared to return in late May. He participated in Minnesota’s first preseason game Saturday, recording a tackle in the Vikings’ home loss to the Broncos. A concussion, however, ended Smith’s day early.

The 24-year-old defender played in five regular-season games with the Vikings, who selected him in the fifth round of the 2019 draft. As a backup and special-teamer in 2019, Smith notched eight tackles. He logged special teams snaps in both of Minnesota’s playoff games that year.

Despite the Vikings waiving Smith before last season, he wound up on their IR list. The team paid his full $675K base salary while he recovered from the operation. Smith was a four-year contributor at USC, topping out at 112 tackles (11 for loss) during his 2017 junior season.

Vikings LB Cameron Smith might not be a household name, but his return to the practice field is still noteworthy. The 24-year-old, who missed the entire 2020 campaign due to open-heart surgery, has been medically cleared to play, as Chris Tomasson of the St. Paul Pioneer Press tweets.

Smith has had a tumultuous start to his pro career. Despite less than impressive measurables, his instincts and collegiate production as a four-year player at USC got the Vikings’ attention, and Minnesota selected him in the fifth round of the 2019 draft. He did not survive final cutdowns at the end of his first training camp, though he was quickly signed to the Vikes’ practice squad after he cleared waivers. He was promoted a few weeks later, saw action in a couple of games, and was waived again, only to end up back on the Vikings’ taxi squad before getting another promotion.

In all, he played five games in 2019, compiling eight tackles. Last August, during a COVID test, doctors discovered his heart condition. “COVID saved my life,” Smith said (Twitter link via Tomasson). The Vikings put him on waivers in a procedural move when they realized he would need heart surgery, and he subsequently reverted to season-ending IR (the club paid him his full $675K salary).

Now, Smith has rejoined his teammates, though he will still have an uphill battle to see significant burn on the defensive side of the ball. The Vikings are returning Anthony Barr and Eric Kendricks, and Minnesota also nabbed North Carolina LB Chazz Surratt in the third round of this year’s draft. Surratt is likely the favorite to land the weakside ‘backer job alongside Barr and Kendricks, but Smith will try to push him for playing time. If nothing else, he could carve out a role on special teams.

Speaking of Barr, the four-time Pro Bowler was also back on the practice field this week, as Tomasson tweets. Barr missed all but two games of the 2020 season due to a torn pec, and he reworked his contract this offseason. He will now be eligible for free agency next March.

In a procedural move, the Vikings announced that they have waived linebacker Cameron Smith. However, this doesn’t mean it’s the end of his tenure with the organization.

As Chris Tomasson of the St. Paul Pioneer Press points out (on Twitter), the front office expects Smith to clear waivers and land on their injured reserve. The reporter adds that the player is expected to earn his fully $675K base salary.

The 23-year-old revealed this weekend that he needs to undergo open-heart surgery and will miss the entire 2020 campaign. Fortunately, Smith also revealed that he opted for a procedure that will allow him to continue his NFL career once he’s fully recovered.

“I found out I need open heart surgery to fix a bicuspid aortic valve that I was born with,” Smith posted on Instagram. “Although this will unfortunately end my 2020 season, it is really a blessing that we found this as my heart is severely enlarged and wouldn’t have lasted much longer. I found this out after I tested positive for COVID and had to have further testing done as protocol. The Lord works in mysterious ways, but I could really feel him on this one!

“By no means am I ready to be done playing football, there is still so much more I want to accomplish on the field. I’m going to attack this like everything else I have in life. Already looking forward to the comeback! #SKOL”

The Vikings selected the USC product in the fifth round of the 2019 draft. The linebacker saw time in five games as a rookie, compiling eight tackles.

Holton Hill is finally back. The Vikings activated the young cornerback after he finished serving his suspensions and waived linebacker Cameron Smith in a corresponding roster move, according to Ben Goessling of the Star Tribune (Twitter link).

Back in April, Hill was slapped with a four-game ban for a PED violation. A few months later he was suspended again, this time for a substance abuse violation, which earned him another four games. Hill made the team as an undrafted rookie last year and ended up playing a key role, appearing in all 16 games and starting three. A Texas product, Hill had been slated for a lot of playing time in 2019. Still only 22, Hill could provide a huge boost to a Vikings defense that quietly hasn’t been as good as in years past.

Goessling writes that Hill could make his season-debut Sunday against the Chiefs, but that doesn’t sound definite. Smith is a rookie who was released at final cuts and then signed to the practice squad before being promoted a couple weeks ago. A USC product, he was a fifth-round pick in April’s draft.