The Falcons are splitting the decisions on their 2019 first-round offensive linemen. In a pair of tweets, ESPN’s Jeremy Fowler reports that Atlanta is picking up the fifth-year option on guard Chris Lindstrom, but declining to do so with tackle Kaleb McGary.

Neither move is seen as much of a surprise. Lindstrom, the 14th overall selection and second offensive linemen to come off the board in that class, has started all 38 games he has played in. While that total includes only five games in his rookie season, he has improved from year to year so far. He was credited with just two penalties committed and zero sacks allowed by PFF, helping him earn a career-high 83.7 grade.

For McGary, who went 31st overall, the transition to the NFL hasn’t gone as smoothly. He has also logged plenty of snaps, starting 45 of 46 career games, but has had neither the immediate impact nor the upward trajectory of Lindstrom. His PFF grades have been in the low-to-mid-60s the past two seasons, and in 2021 he ranked 59th out of 83 qualifying tackles. He will head into this season unsure of his future with the team beyond that point.

By picking up Lindstrom’s option, Atlanta will have a key cog on the offensive line in place for at least two more seasons. As a Tier 3 player for financial purposes, he will earn just over $13.2MM in 2023. Given his level of play – and, to a lesser extent, the team’s lack of significant additions at the position in the draft – it would come as little surprise for a long-term deal to be on the horizon for him.

Chris Lindstrom‘s season will resume Sunday. The Falcons activated the rookie guard off IR on Saturday and will reinstall him as their starting right guard.

Atlanta waived tight end Carson Meier to clear a roster spot. The team has used both of its IR-return spots over the past week, activating both Lindstrom and punter Matt Bosher. The latter, however, re-injured his groin and is back on IR.

Lindstrom returned to practice just this week, but the Falcons are evidently satisfied with his health and progress after a few days. The Boston College-developed prospect has spent nearly three months on IR because of a foot injury, last playing in Atlanta’s opener.

The Falcons used two first-round picks on offensive linemen this year, selecting Lindstrom at No. 14 overall and adding Kaleb McGary at No. 31. Neither’s first years have gone as the team hoped. McGary underwent heart surgery but returned to start all 12 Falcons games thus far. As a result, the Falcons have barely seen their two top rookie investments in uniform together.

Chris Lindstrom‘s rookie season is not definitively over, but the Falcons guard will not be back until at least November. The team is expected to place the first-round pick on IR, Tom Pelissero of NFL.com notes (on Twitter).

The Boston College product broke a small bone in his foot on Sunday, and Pelissero adds this injury can be categorized as similar to the one Deion Jones suffered in September of 2018. Jones went to IR and returned for five games.

Atlanta has dealt with issues involving both of its first-round lineman choices. Kaleb McGary missed much of training camp because of a heart condition but has since returned.

The Falcons have some veteran insurance behind Lindstrom, adding both James Carpenter and Jamon Brown this offseason. Carpenter operated as Atlanta’s Week 1 left guard starter; Brown was inactive in Week 1. The Falcons also have third-year man Wes Schweitzer as well. A 2017 sixth-round pick, Schweitzer started 28 games for the past two Falcons editions.

Although Schweitzer replaced Lindstrom on Sunday, Dan Quinn confirmed the Falcons’ Week 2 guard configuration will be Carpenter-Brown. The latter was a regular Rams starter before being waived in 2018; Brown spent the final eight games of 2018 as a Giants starter.

The Falcons have signed first-round guard Chris Lindstrom, according to D. Orlando Ledbetter of the Atlanta Journal-Constitution. Lindstrom, the No. 14 overall pick in the draft, will receive a four-year, $14.6MM deal with an $8.6MM signing bonus. 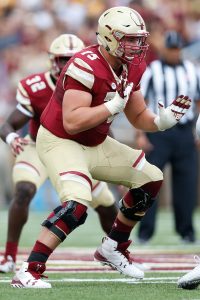 With that, the Falcons have now signed their entire 2019 draft class. Here’s the rundown, via PFR’s NFL Draft tracker:

Lindstrom has an NFL-ready body at 6’4″ and 310 pounds. Lauded for his athleticism, many evaluators view him as an ideal fit for zone blocking schemes. Meanwhile, NFL.com’s Lance Zierlein offered up high praise of the Boston College product, comparing him to Browns standout guard Joel Bitonio.