Jaguars quarterback Nick Foles suffered a broken left clavicle against the Chiefs, the team announced. There’s no timetable for his return, but this figures to be a lengthy absence for the club’s new signal caller. He’ll go under the knife on Monday and, after the operation, doctors should know more about his status moving forward. 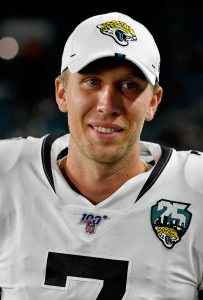 Foles’ debut wound up lasting less than one quarter. Early on, Chiefs defensive tackle Chris Jones broke through the O-Line and slammed Foles to the ground, where he suffered the injury. Foles’ ball was caught by DJ Chark for a touchdown, but the club was forced to turn to sixth-rounder Gardner Minshew on the next drive. The Jaguars went on to lose 40-26 without Foles, and it didn’t help that they also lost linebacker Myles Jack along the way following his ejection.

For now, Minshew projects as the club’s starter for next week’s game against the Texans, as he is the only QB on the active roster. His backup, in all likelihood, will be practice squad member Chase Litton.

The Jaguars inked Foles to a four-year, $88MM deal in March, including $50MM+ in guarantees. The club, of course, still has high hopes for the 30-year-old and one-time Super Bowl MVP.