Former Lions safety Glover Quin announced his retirement early Monday morning. At the age of 33, Quin has decided to move on to other endeavors.

“Playing professional sports was always a dream of mine. Football was the route I chose and God blessed me to be able to persevere through all the hardships and play 10 years in the NFL,” Quin wrote in a text message to ESPN’s Michael Rothstein. “I’m so thankful for the opportunity I had to play in the NFL with such great players and two great organizations.

“Football was never who I was as a person. It was always what I had done. I wanted to use football as a stepping stone into the rest of my life and not let football be my life. I always only wanted to play 10 years. Said if I was able to walk off the field after the last game in Year 10, it would be really hard for me to walk back on. I’m young, I’m healthy and I got a lot of life to live. So I’m walking away from the game of football.”

The Lions released safety Glover Quin in February, but his run with Detroit could have ended much sooner. Quin actually asked the team to release him in the previous offseason, shortly after the team hired Matt Patricia However, the Lions obviously declined, and kept Quin for the 2018 campaign before cutting ties.

Quin started in all 16 of the Lions’ games in 2018, but saw some of his play time eaten into by rookie Tracy Walker down the stretch. Although his performance dipped near the end, he left the game with a 148-game starting streak, the highest of any active safety in the NFL up until his retirement.

The New Mexico product enjoyed the best season of his career in 2014 when he earned a Pro Bowl nod and registered seven interceptions. Over his decade in the NFL with the Texans and Lions, Quin recorded 24 interceptions and 740 tackles in total.

We’re just a few weeks away from the start of free agency, and the market is starting to heat up. Tom Pelissero and Mike Garafolo of NFL Network were recently discussing the wide receiver market, and both think that Chargers receiver Tyrell Williams is in for a big payday (Twitter link). Pelissero points out that “four NFL players since 2015 have averaged over 16 yards on 150+ catches: DeSean Jackson, T.Y. Hilton, Rob Gronkowski“, and Williams.

Williams has been quietly producing for the Chargers the past few years, but has mostly been hidden behind Keenan Allen and Mike Williams. It doesn’t sound like Los Angeles is looking to commit major resources to their third receiver, so it seems probable that he walks next month. Both Garafolo and Pelissero seem to think he could wind up as some new team’s number one wideout. A former undrafted free agent from Western Oregon, Williams had 653 yards and five touchdowns last year.

Glover Quin Undecided On Playing In 2019

Lions safety Glover Quin does not know yet if he will play in the NFL in 2019, the Detroit Free Press’ Dave Birkett writes.

When asked by reporters if he would be returning next season, the veteran defender responded by saying, “I don’t know. We’ll see.” Asked if he would consider another place to play besides Detroit, he answered, “I don’t know. Depends on the situation.”

Quin, who turns 33 in January, has started all 15 of the Lions’ games in 2018, but has seen some of his play time eaten into by rookie Tracy Walker in recent weeks. Birkett says there is growing speculation the 10-year veteran will retire or be released before next season. The 2014 Pro Bowl selection is due a $5.25MM base salary with an extra $1MM in bonuses next season.

A fourth-round pick in 2009 by Houston, Quin quickly moved into a starting role as a cornerback before transitioning to safety with the Texans. He hit his stride in Detroit, where he logged a league-leading seven interceptions in 2014. His 2018 season has been a down one, however, as Quin has yet to register an interception. He tallied at least two picks in every season since 2011.

During the 2018 offseason, Quin reportedly contemplated retirement while away from the team in the spring dealing with a family issue. He returned for June minicamp, however, and says he has been locked in since returning to the team.

A few notes from Detroit:

The Lions have signed safety Glover Quin to a two-year extension that will keep him in Detroit through the 2019 season, the club announced today. The new deal is worth $13MM and contains $9.5MM in guarantees, per Adam Schefter of ESPN.com (Twitter link).

Quin, 31, indicated a desire for a new contract in May, and the Lions reportedly began discussing an extension with Quin’s representatives the following month. Set to enter the final season of a five-year, $23.5MM pact he signed prior to the 2013 campaign, Quin had been scheduled to earn a $4MM base salary and a $1MM roster bonus while carrying a cap charge of ~$7.828MM. Quin’s annual salary of $4.7MM ranked just 27th among NFL safeties.

“I would love to be here in Detroit, and if I sign an extension, I’d probably finish my career here — that’d be huge for me,” Quin said in May. “But I can’t control that. I don’t know if it’s going to happen, when it’s going to happen. My job is like I’ve always said since I got in the league, is I’m a player. So I just play, and I’ll let the coaches coach, the managers manage, and the trainers train.”

Quin has been a remarkably durable player throughout his eight-year NFL career, as his only missed game came during his rookie season in 2009. Last season, Quin played all 1,027 of the Lions’ defensive snaps while posting 68 tackles, two interceptions, and ranked an impressive 23rd in performance among Pro Football Focus’ 90 qualified safeties.

Although “internal optimism” exists regarding the Lions’ extension talks with quarterback Matthew Stafford, the veteran signal-caller says there’s “no timetable” guiding the negotiations, according to Tim Twentyman of DetroitLions.com (Twitter link). Although Stafford admitted that his agent Tom Condon is currently discussing a deal with Detroit, he told reporters he wasn’t sure if he’d allow negotiations to continue once the regular season gets underway, as Michael Rothstein of ESPN.com reports. Last month, Lions president Rod Wood implied he’d be “comfortable” making Stafford the NFL’s highest-paid quarterback, which would mean agreeing to an annual salary north of $25MM. 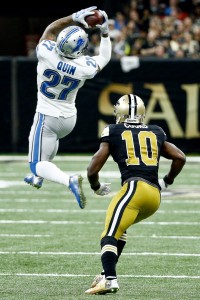 The 2017 campaign will be free safety Glover Quin‘s fifth season in Detroit. As a potential contract-year player, it could also be his last season in the Motor City, but Quin hopes that isn’t the case. The 31-year-old has approached the Lions about an extension, writes Kyle Menke of MLive.com.

“I would love to be here in Detroit, and if I sign an extension, I’d probably finish my career here — that’d be huge for me,” Quin said Thursday. “But I can’t control that. I don’t know if it’s going to happen, when it’s going to happen. My job is like I’ve always said since I got in the league, is I’m a player. So I just play, and I’ll let the coaches coach, the managers manage, and the trainers train.”

While it’s unclear whether the Lions are interested in re-upping Quin, it’s obvious the team has gotten strong production from the former Texan since signing him to a five-year, $23.5MM contract in 2013. In Detroit, Quinn has continued an iron-man streak that dates back to 2010, having missed zero games since then (and he only sat out one in 2009, his rookie year). Quin has also started in each of his appearances going back to Year 2 of his career, and in 64 regular-season games with the Lions, he has piled up 16 interceptions. A career-high seven of those picks came in 2014, Quin’s lone Pro Bowl/All-Pro season, but his quality play has continued even without the accolades. Quin posted 68 tackles and two INTs last year, when he astoundingly played all 1,027 of the Lions’ defensive snaps and ranked an impressive 23rd in performance among Pro Football Focus’ 90 qualified safeties.

Given that he’ll turn 32 next January, Quin’s next deal is unlikely to match his soon-to-expire contract in either length or total value. But the average value of an extension (or a free agent pact next year) could be similar to the $4.7MM mean on his current accord, evidenced by contracts given out during the past two offseasons to over-30 safeties such as the Raiders’ Reggie Nelson (two years, $8.5MM), the Cardinals’ Antoine Bethea (three years, $12.75MM) and the Bears’ Quintin Demps (three years, $13.5MM). All of those players had to leave their previous organizations to land those deals, which Quin is prepared to do if the Lions are uninterested in re-signing him.

“If they feel like I deserve that and have earned that, then they’ll make it happen,” he said. “If not, then I’ll play my year in Detroit and say goodbye to you good people.”