Three teams have inquired on trading for Antonio Brown, Steelers GM Kevin Colbert told NFL Network (via Yahoo Sports). Still, he does not expect a trade to come together right away. 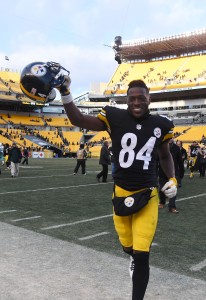 Stressing that the process will take time, Colbert indicated that things could pick up over the next week or so as teams gauge the free agent wide receiver market, make their “own free agency evaluations,” and watch prospects at the combine.

Still, the Steelers don’t have all the time in the world. Brown is due a $2.5MM roster bonus on March 17 and it would make little sense for them to pay that bonus and then trade him. A deal could take time, but, realistically, the Steelers have less than a month to get something done.

Some NFL executives believe the Steelers won’t get more than a third-round pick for one of the game’s most dynamic talents. Naturally, the Steelers want more.

“By no means are we going to make a trade or any type of move that will not be beneficial to Pittsburgh Steelers organization,” Colbert said recently.

Between Brown’s shots at the Steelers on social media and his other off-the-field issues, it will be interesting to see how much leverage the Steelers have in trade talks. Any team in the NFL would probably like to have Brown, but clubs also know that his relationship with the club appears to be irreparably damaged.

Brown, 31 in July, earned his sixth consecutive Pro Bowl selection in 2018, finishing with 104 catches, 1,297 yards and a league-leading and career-high 15 touchdown receptions.