Less than a month ago, Raiders quarterback Derek Carr signed a five-year, $125MM extension to become the NFL’s highest-paid player. Carr’s stay atop the league’s earnings mountain might not last much longer, though, as there’s “internal optimism” that the Lions and quarterback Matthew Stafford will agree to a new deal within the next two weeks, reports Stacey Dales of NFL Network (via Chris Wesseling of NFL.com). 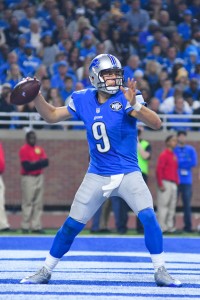 Stafford’s entering the final season of the three-year, $53MM extension he signed in July 2013, but his next contract figures to obliterate that pact in value and could surpass Carr’s. The 6-foot-2, 230-pound Stafford inked his current pact after a 20-touchdown, 17-interception showing for him and a 4-12 season for Detroit, and both he and the Lions have been far more successful since.

Stafford helped guide the Lions to a decent 34-30 record and two playoff berths over the past four seasons, and he’s now arguably fresh off the best two-year stretch of his career. Thanks in part to Jim Bob Cooter‘s promotion to offensive coordinator, Stafford tossed 56 TDs against 23 picks and completed upward of 67 percent of passes from 2015-16. He threw 24 scores and a meager 10 INTs last season, when both Football Outsiders and Pro Football Focus ranked him as the league’s eighth-best passer.

Given the 29-year-old Stafford’s strong output in recent seasons, the ever-rising salary cap and the importance of his position, a mega-deal looks like a formality. Lions president Rod Wood implied as much last month, saying he’d be “comfortable” making Stafford the league’s top-paid player and adding, “It’s a premium position, and you need to have a very, very good player at that position to be credible and be competitive, and I think we do have that, and we’re working on getting a deal done.”

Another sizable contract would be the third for Stafford, who had the benefit of entering the NFL as the No. 1 pick in 2009, shortly before the league introduced the rookie wage scale in 2011. His initial deal was worth $78MM over six years and included $41.7MM in guaranteed money. Having established himself as a quality signal-caller since then, the eight-year veteran is on a path to becoming one of the highest earners in league history.