Maybe the most anticipated pro day of the year occurred today when Oklahoma’s event included controversial running back Joe Mixon. Since the former Sooners ball-carrier didn’t receive an opportunity to perform at the Combine, he tested today. 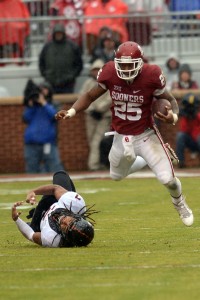 Mixon ran a 4.50-second 40-yard dash, running one sprint, and performed 21 bench press repetitions of 225 pounds. He posted 35-inch vertical jump. The 21 bench reps would have tied Mixon for sixth among running backs at the Combine, while the 40 time would have placed him in a tie for ninth. Nine running backs surpassed 35 inches on their vertical vaults in Indianapolis (Twitter link via Gil Brandt of NFL.com).

The Panthers came away as one of the interested teams, per David Newton of ESPN.com (on Twitter). They won’t likely be the only one. Four teams — the Bengals, Browns, Lions and Saints — met with Mixon on Tuesday night in Norman, Okla. Other NFL personnel pegged him as a potential first-round talent, though some teams have removed him from their boards due to the 2014 incident that saw a video camera capture him hitting a woman. Others are on the fence.

“He was public enemy No. 1 on campus,” said one AFC scout, via Albert Breer of TheMMQB.com. “You heard stories about people staring at him, taking pictures in class, the stuff he’d hear from other fan bases. Some guys [in that situation] would fly off the handle. … And he’s been nothing but a model citizen, a great teammate.”

Mixon amassed 1,812 yards from scrimmage and scored 15 touchdowns last season, averaging 6.8 yards per carry. He will follow the likes of Tyreek Hill and Frank Clark in polarizing talents that come into the NFL with this kind of off-field baggage. Tom Pelissero of USA Today expects Mixon to be drafted on Day 2, like Clark was.

6 comments on “Latest On Joe Mixon”