The Bills are signing fullback Patrick DiMarco, Ian Rapoport of NFL.com (on Twitter). He’ll get a four-year deal worth $8.5MM. The pact will contain $4MM guaranteed. 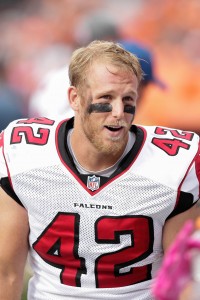 DiMarco was one of the top fullbacks available this offseason. Now that he has gotten a sizable payday, the arrow will be pointing upwards for Ravens free agent fullback Kyle Juszczyk. The Bills were considered the favorites on Juszczyk earlier, and it’s possible they did not want to spend to match an asking price that’s expected to be the new fullback standard. This stands to leave the Browns, 49ers and Ravens in better position to land Juszczyk, who wants a hybrid-type role in addition to pure fullback duties.

The Falcons wanted to retain DiMarco — PFR’s No. 2 UFA fullback free agent behind Juszczyk — but could not keep him from making plans to move to Buffalo. DiMarco earned Pro Bowl acclaim in 2015 with the Falcons, his employer from 2013-16, and profiles as more of a straight-up blocking back than does Juszczyk. While the Ravens’ blocking back graded as Pro Football Focus’ top fullback, the Falcons’ lead blocker received the best run-blocking grade at the position.

Considering the Bills led the league in rushing last season and used a pure fullback in Jerome Felton, this addition — and the retention of Tyrod Taylor — may be a sign Buffalo wants to keep the offense on a similar track.