The Eagles are expected to pursue DeSean Jackson in free agency this offseason. Apparently, the interest is mutual. A source close to DeSean Jackson believes the wide receiver would be “intrigued” by a possible return to Philadelphia, Tim McManus of ESPN.com writes. 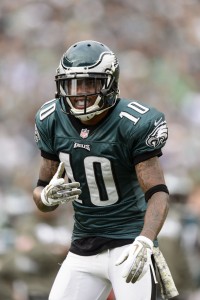 As you may recall, Jackson did not have the cleanest breakup with the Eagles in 2013. After catching 82 passes for 1,332 yards and nine touchdowns, Chip Kelly unsuccessfully tried to trade Jackson and ultimately released him. This came right around the same time as a story alleging that Jackson had gang ties that the Eagles found to be troubling.

Years later, Kelly is out of the picture and it sounds like top exec Howie Roseman wants to make things right. It also helps that new coach Doug Pederson is a fan of the 30-year-old. A reunion would make a lot of sense for both sides and it is a situation to watch as we look ahead to March.

The Eagles face the Redskins in Philly on Sunday.