Shortly after authorizing the richest defensive contract in NFL history, the Bears are locking down another key defender. 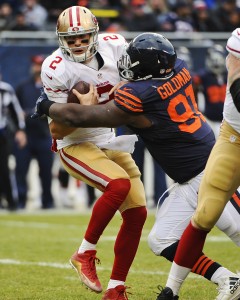 The Bears and nose tackle Eddie Goldman agreed on a four-year extension worth more than $42MM Friday, Ian Rapoport of NFL.com tweets. The 24-year-old lineman will receive $25MM guaranteed as a result of this re-up, Rapoport reports.

A former second-round pick, Goldman was entering his contract year. Two days before the Bears begin their 2018 season, they now have another defensive lineman signed long-term. They took care of Akiem Hicks last year and now have four of their front-seven bastions signed to long-term deals, with Danny Trevathan and now Khalil Mack in the fold on veteran deals — one of which standing out a bit more than the other.

Goldman won’t be paid close to what Mack is, but the fourth-year starter is now one of the highest-paid nose tackles in the game.

Among pure 3-4 nose players, Goldman’s $10.5MM-AAV-plus agreement now is in line to sit second among this position. And among those extended long-term, Goldman’s deal now leads the pack. Ndamukong Suh is making $14MM this season, but the Rams gave him a one-year deal. Goldman’s now set to collect the most guaranteed money among nose tackles, his $25MM haul surpassing Damon Harrison‘s $20MM guarantee.

The Florida State alum started 15 games for Vic Fangio’s improved defense in 2017, bouncing back from a 2016 season-ending injury. He’ll join Hicks and Jonathan Bullard as first-unit linemen when the Bears face the Packers on Sunday night and will now do so knowing his long-term future will be in Chicago.