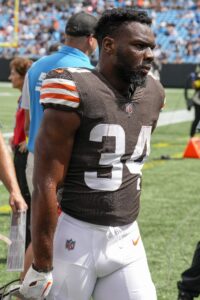 The Browns moved closer to having a pair of players return to the fold coming off of their bye week. The team announced on Monday that edge rusher Chase Winovich and running back Jerome Ford have been designated to return from IR.

That opens up a three-week return window for both players. If they fail to be activated within that timeframe, they will remain sidelined for the rest of the season. Cleveland currently has six activations remaining for the year, with tight end Jesse James also a candidate to return.

The latter, along with Winovich, went on IR following Week 2. That guaranteed a four-week absence, but Winovich’s hamstring injury has cost him the past six games. That stalled what could have been the beginning of a rotational role emerging for the former third-rounder who struggled to lock down a starting gig during his three seasons with the Patriots.

That led to an offseason trade sending him to Cleveland in exchange for linebacker Mack Wilson. Winovich, 27, entered the league with plenty of fanfare as a disruptive force after his time at Michigan, and began his NFL career with consecutive 5.5-sack seasons. He was held without one last season, however, leading to the change of scenery. A pending free agent, Winovich will slide in behind Myles Garrett and Jadeveon Clowney on the depth chart upon his return.

Ford, meanwhile, had played exclusively on special teams for the first four weeks of the season before being sidelined. With Nick Chubb and Kareem Hunt ahead of him in the pecking order, the fifth-round rookie operated as the team’s kick returner prior to the injury. Hunt was the subject of plenty of trade talk, but it came out during last week’s deadline that the Browns preferred to keep him, and they ultimately did. Ford will therefore continue with a third phase role upon his return.

Winovich and Ford could be activated as early as this week, making them available for Cleveland’s game this Sunday against the 6-3 Dolphins.