Before the draft, Ravens safety Chuck Clark was in line to continue with the starting role he has held for the past three years. As a result, there was little reason to suspect he would be as involved in trade talk as he has been recently. 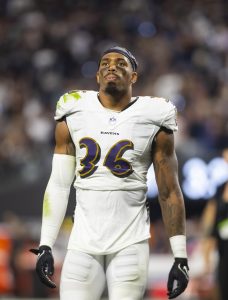 That all changed after the first round, however, when the Ravens selected Kyle Hamilton, not only the top safety prospect but one of the highest-rated members of the draft class as a whole. Given the newfound depth at the position, Clark was quickly named as a potential trade candidate.

While head coach John Harbaugh publicly stated the team’s intentions of keeping him, the 27-year-old was reported days later to nevertheless be drawing trade interest from multiple teams. The presence of not only Hamilton, but also top free agent signing Marcus Williams, would threaten to eat into Clark’s playing time significantly.

The most recent update on the matter came when Clark hired a new agent, as noted by Jeff Zrebiec of the Athletic (subscription required). He is now represented by Joel Segal, whose client list also includes Ravens defensive backs Marlon Humphrey and Tony Jefferson. Zrebiec points out that Clark “has done nothing… to fuel the speculation that he wants out of Baltimore,” maintaining the leadership qualities he has become known for as the defense’s signal-caller.

On the other hand, Zrebiec also makes it clear that a parting of ways between the two sides remains a possibility. A trade could provide an acquiring team with a cost-controlled, consistent contributor; Clark is under contract for two more seasons and has totaled 249 tackles and five interceptions over the past three years. From Baltimore’s perspective, a swap would create $2.75MM in cap space — an amount made more significant when considering the team is currently near the bottom of the league in financial wiggle room.

Regardless of what happens next in this situation, this will remain a story worth watching into the summer.

The Ravens used their top draft choice on Notre Dame safety Kyle Hamilton, doing so a few weeks after signing Marcus Williams to a big-ticket free agent deal. That has invited speculation on Chuck Clark‘s status.

Although John Harbaugh has said he plans on Clark remaining a Raven, teams reached out about trade interest. Following Baltimore’s Hamilton selection, ESPN.com’s Jeremy Fowler notes the team received calls about Clark’s availability. Multiple teams inquired. Given an extension in February 2020, Clark is under contract for two more years — on just $2.75MM and $3.29MM base salaries.

Clark’s experience and low-cost contract would make him an attractive trade piece, and Fowler adds the veteran starter would be open to a move. The sixth-year veteran has not requested a trade but obviously would prefer to remain a regular contributor. The arrivals of Williams and Hamilton stand to cut into Clark’s playing time, even if the Ravens intend to deploy more three-safety looks.

A former sixth-round pick, Clark moved into the Ravens’ starting lineup full-time in 2019. The Virginia Tech alum is going into his age-27 season. During Clark’s time in Baltimore, the team has devoted significant resources to the safety spot. Eric Weddle, Tony Jefferson and Earl Thomas played on higher-end free agency accords in recent years, but the Ravens’ recent commitment to the position sets this offseason apart.

After the events of this offseason, and the draft in particular, veteran Ravens safety Chuck Clark has been named as a player the team might look to move on from. Head coach John Harbaugh doesn’t see him going anywhere, however. 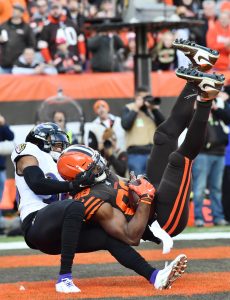 When speaking to the media, Harbaugh said, “the idea is to have as many good players as you can have and have them in the right spots and the right roles. I love the fact that we have very versatile players in the backend and at safety. So, to me, Chuck is a big part of this team, and I’m planning on Chuck being here.”

Those comments were made in light of the fact that the team drafted safety Kyle Hamilton 14th overall. Lauded for his range and positional versatility, many felt that his addition would make Clark redundant. The latter has been a starter for the past three seasons, totalling 249 tackles, four interceptions and 25 pass deflections during that stretch. He has also worn the green dot as the player responsible for organizing the defense on the field.

Still, the overlap in skillsets between Clark and Hamilton has led to speculation that the Ravens could handle his situation in a similar fashion to those of Orlando Brown Jr. and Marquise Brown – highly regarded players whose trade requests were honored despite the team having the option of keeping them for at least one more season. The 27-year-old is under contract for two more years, with cap hits of $4.6MM and $5.2MM, though he has no guaranteed money remaining on his deal.

Assuming Clark is retained, he could still see plenty of playing time even if Hamilton starts right away. He has experience lining up in a number of positions, just as the latter does from his time at Notre Dame. The team should have opportunities to use three-safety packages (complementing free agent signee Marcus Williams) given their lack of established veterans at the inside linebacker and slot corner positions. If they do part ways, though, Baltimore would turn to the likes of Brandon Stephens, Tony Jefferson and Geno Stone to fill the safety void.

The Ravens were busier than expected during Round 1 of last week’s draft, making not one but two selections. To acquire the second pick, of course, they honored Marquise Brown‘s trade request. That was the largest of a number of receiver departures this offseason, leaving many surprised the team didn’t draft a wideout at any point over the weekend.

When asked about that, general manager Eric DeCosta said, “it wasn’t for a lack of effort. I think, honestly, the fact that there was a run of receivers in the first round like there was … I wouldn’t say it was a great receiver class in general, compared to some of the years… There were some receivers that we liked; we tried to take a couple guys at different points… I said this last year, but we like our receivers.”

Baltimore’s WR room now consists of recent draftees Rashod Bateman, Devin Duvernay, James Proche and Tylan Wallace. DeCosta did say, though, that the team “will add players to the mix”, a process which will likely involve diving into the remaining free agent market.

Here are some more notes from around Charm City: