The Cowboys should be getting a major boost to their front seven within the month. Defensive ends DeMarcus Lawrence and Randy Gregory, both currently on IR, could be back in action in the next three to four weeks, per club VP Stephen Jones (Twitter link via Jon Machota of The Athletic). DT Neville Gallimore is on the same timeline. 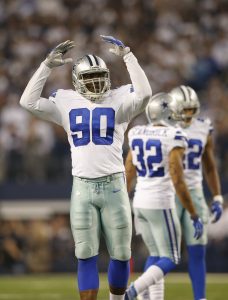 Dallas responded to its surprising loss at the hands of the Broncos in Week 9 by administering a thorough dismantling of the Falcons last week, and the 7-2 outfit has the makings of a legitimate championship contender. Getting back two of their top pass rushers would, of course, go a long way towards a deep playoff run.

Lawrence played in the Cowboys’ season opener but then suffered a broken foot in practice, which has kept him on the sidelines ever since. The 29-year-old has not been producing the type of gaudy sack totals that he amassed over the 2017-18 seasons — which helped earn him a five-year, $105MM contract in March 2019 — but he is still a key piece of Dallas’ defensive front.

Gregory, after missing a great deal of time due to suspensions over his first few seasons in the league, had posted five sacks and 12 QB hits through seven games this year before suffering a calf injury in practice earlier this month. He is out of contract at season’s end, and if he continues to play well when he returns, he could be in line for a nice payday. The current expectation is that the club will explore a long-term pact with him this offseason.

Gallimore, a 2020 third-rounder, started nine games in his rookie campaign and was expected to serve as a starter again this year. A dislocated elbow has kept him on the shelf all season, but if nothing else, he could be a useful rotational piece on the interior of the D-line. Third-round rookie Osa Odighizuwa and veteran Carlos Watkins have not been especially effective as the Cowboys’ starting DT tandem in 2021.