Cole Beasley‘s desire to land on a contending team and Tampa Bay’s uncertainty at the wide receiver position have resulted in a deal. The veteran is joining the Buccaneers’ practice squad with the expectation that he will soon be elevated to the 53-man roster, reports Mike Garafolo of NFL Network (Twitter link). 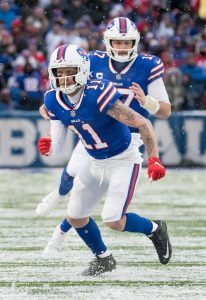 Beasley, 33, was reported to be fielding offers last week. He is coming off of the least-productive of his three seasons in Buffalo, a campaign which still saw him make 82 catches, resulting in 693 yards and one touchdown. Overall, his Bills tenure demonstrated the durability and consistency he has become known for, making it little surprise that he was the subject of free agent interest.

Likewise, it was hardly newsworthy that the former UDFA was remaining patient on the open market while eyeing a spot on a Super Bowl-caliber team. Garafolo notes that Tom Brady made a push for Tampa Bay to add another veteran, and that Beasley was a preferred target of his. Beasley could see immediate playing time, given the team’s current lack of availability at wideout.

Both Chris Godwin and Julio Jones are nursing injuries which kept them sidelined for Tampa’s Week 2 games against the Saints, leaving their status for Week 3 uncertain. The same is also true of Mike Evans, who is appealing the one-game suspension he was issued yesterday for his involvement in the latest altercation between he and Marshon Lattimore. If he were to lose the appeal, Tampa could face the Packers on Sunday without all three starters.

In the absence of Godwin in particular, Beasley could find himself seeing a notable workload in the slot. He, along with Russell Gage, Breshad Perriman and Scotty Miller would constitute the pass-catching array available to Brady in at least the short-term. The latter in particular has been thought to be on the roster bubble dating back to the end of training camp, and played only a rotational role on Sunday despite the Buccaneers’ injuries.

This deal will surely come in at a far lower figure than the $7.6MM Beasley averaged per season with the Bills. Still, it could prove to be a fruitful investment for the team, and a rewarding commitment on his part.