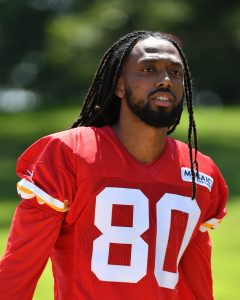 The Chiefs have announced the signing of 17 undrafted free agents. The entire list is below:

With uncertainty surrounding Tyreek Hill, the Chiefs have been hunting for wide receiver help. They apparently focused in on Custis, as ESPN’s Adam Schefter tweets that the team gave him more than $100K in guaranteed money. This is the highest guarantee for an undrafted receiver in at least the past two years. The Syracuse product had a breakout campaign during his senior season, hauling in 51 receptions for 906 yards and six touchdowns. The Chiefs ended up adding five undrafted receivers in total, and that’s in addition to second-round wideout Mecole Hardman.

The Fox move is particularly interesting, as Dustin Colquitt has been a mainstay of the Chiefs punting unit since 2005. The 36-year-old had a career-low 45 punts in 2018, although he did manage to place 21 of those inside the 20. With Colquitt eyeing his 15th NFL season, the organization may simply be looking to provide the veteran with some competition.

It’s also notable that the Chiefs added three undrafted quarterbacks. The coaching staff will presumably let the rookies battle during the early parts of camp, with perhaps one of them joining EJ Manuel, Chad Henne, and Chase Litton for the backup quarterback competition.