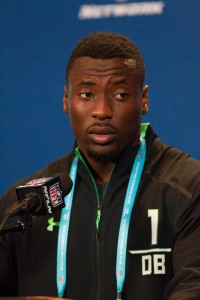 Collier County (Fla.) authorities arrested Alexander, 26, on one count of battery. The arrest is in connection with the disappearance of Alexander’s father. Alexander is believed to have confronted the man who left his father after a Monday berry-picking trip in Okeechobee County, Pelissero tweets.

Alexander’s father, Jean Odney Alexandre, was reported missing Monday night. Okeechobee County authorities reported Alexandre, 65, had traveled with an unnamed man Monday but did not report the latter as missing.

The Bengals defender is on track to be released from jail soon, according to Pelissero (on Twitter), and is expected to rejoin the search of his missing father. Alexander is expected to plead not guilty to the battery charge, Ben Baby of ESPN.com tweets. This arrest may still trigger a suspension under the NFL’s personal conduct policy.

Alexander signed a one-year, $4MM contract with the Bengals this offseason, coming to Cincinnati after four seasons in Minnesota.