The NFL has suspended former Vikings linebacker Kentrell Brothers for the first nine weeks of the 2020 season, a source tells Field Yates of ESPN.com (on Twitter). This marks the second suspension of his career. 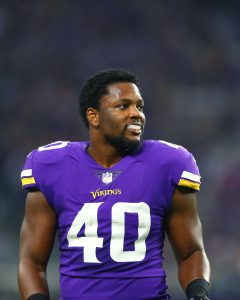 Brothers, who spent the past four seasons with the Vikings, is a free agent. The story behind his latest ban isn’t immediately clear, but it certainly won’t help his case as he looks for work.

Brothers has appeared in 51 games for the Vikings since entering the league as a fifth-round pick. Two years ago, he was hit with a four-game suspension for violating the NFL’s performance enhancing drug policy. Brothers accepted the punishment without appeal, though he said he did not knowingly take a banned substance.

In other Vikings news, safety Anthony Harris is on course for free agency. Now that the franchise tag deadline is in the rear view mirror, Harris will play out the 2020 season on a one-year, $11.4MM deal. The two sides will have to wait until next year before resuming extension talks, at which point he’ll be in line for a sizable raise.

Kentrell Brothers is back. The team announced that they’ve activated the linebacker from the exempt list. To make room on the roster, the team waived offensive guard Bryan Witzmann.

Brothers, 25, was handed a four-game suspension back in April for violating the league’s performance enhancing drug policy. The 2016 fifth-round pick accepted the punishment, saying he was unaware that the unnamed substance was banned.

“While it was not my intention to violate any league policies, I understand that it is up to me to be aware of what goes in my body, and I take full responsibility for that,” Brothers said. “I sincerely apologize to the Vikings organization, my teammates and our fans for my mistake. I take my job as a professional seriously and will continue to support my teammates during this time.”

The linebacker was allowed to participate in the Vikings’ entire offseason program, including preseason practices and games.

While Brothers will slide behind Eric Kendricks and Devante Downs on the middle linebacker depth chart, he’ll still earn playing time due to his special teams prowess. He only played eight defensive snaps in 2018, earning the majority of his 13 tackles on special teams. He’ll be joining a Vikings grouping that’s allowed the lowest kickoff return average in the NFL (15.3 yards). The team is also tied for sixth for the lowest punt return average (5.2 yards).

Vikings linebacker Kentrell Brothers released a statement following his four-game suspension by the NFL for violating its policy on performance-enhancing drugs, via Chris Tomasson of the St. Paul Pioneer Press.

“While it was not my intention to violate any league policies, I understand that it is up to me to be aware of what goes in my body, and I take full responsibility for that. I sincerely apologize to the Vikings organization, my teammates and our fans for my mistake. I take my job as a professional seriously and will continue to support my teammates during this time.”

It has still yet to be revealed what Brothers, a fifth-round pick in 2016, tested positive for. He’ll be able to take part in the team’s entire offseason program, including preseason practices and games.

Brothers appeared in just nine defensive snaps in 2017 but was also a contributor on special teams.

Bad news for Vikings linebacker Kentrell Brothers. The former fifth-round pick has been suspended for the first four games of the 2018 season for violating the performance enhancing drug policy, per a league announcement.

Brothers has appeared in 26 games over the last two seasons for Minnesota. In that time, he has recorded 22 tackles, primarily as a special teamer. Per league rules, he’ll be able to practice with the team and play in the preseason, but will be sidelined for Weeks 1-4.

Checking in on the latest rookie signings from around the NFL…