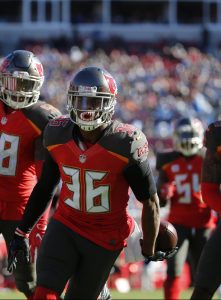 The Buccaneers are interested in extending Robert McClain‘s time in Tampa to beyond one season.

Jenna Laine of ESPN.com reports the Bucs are considering re-signing the cornerback. McClain started nine games for the team last season, working both on the outside and in the slot.

A key rotational cog for the Panthers in Super Bowl 50, McClain has played for three of the four NFC South teams — with his three-year Falcons run from 2012-14 being his longest NFL stay — and is entering his age-30 season.

Tampa Bay has Brent Grimes as a UFA as well, so the franchise has a need at cornerback despite using a first-round pick on Vernon Hargreaves two years ago. 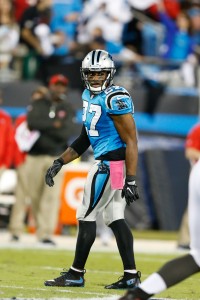 The Chargers announced that they have claimed Robert McClain off of waivers. The cornerback was dropped by the Panthers late last week.

The Bolts will now kick the tires on a veteran player who has been pretty mediocre for the last few seasons. This year, Pro Football Focus has him ranked as just the No. 115 cornerback in the league out of 123 qualified players. His best year came with the Falcons in 2012 but he had a respectable year with Carolina in 2013. Since then, he has been barely above replacement level, according to the advanced metrics.

The Chargers have Brandon Flowers and Casey Hayward atop their cornerback depth chart with Craig Mager, Trevor Williams, Trovon Reed, and now McClain in reserve. The addition of McClain could be a sign that Flowers will need some additional time to recover from his concussion.

The Panthers have begun to address their depth issues in the secondary, announcing today in a press release that they’ve signed free agent cornerback Robert McClain. In a corresponding roster move, the club placed corner Bene Benwikere on the injured reserve list due to a broken leg.

Five years ago, McClain began his career with the Panthers after being selected in the seventh round of the 2010 draft by the team, so it’s a homecoming of sorts for the 27-year-old. McClain last played for the Falcons, starting 15 of 47 games for Atlanta from the 2012 to 2014 seasons. A year ago, he compiled 59 tackles to go along with two interceptions and a sack.

While McClain will provide some veteran depth in the Panthers’ defensive backfield, another move may be coming later this week for Carolina. Bill Voth of Black and Blue Review hears from multiple sources that cornerback Charles Tillman has been dealing with a partially torn ACL, adding that an IR stint seems likely for the veteran.

Voth and Joseph Person of the Charlotte Observer both indicate that the team is expected to promote cornerback Lou Young from the practice squad to take Tillman’s place on the roster, assuming the veteran’s knee doesn’t show signs of improvement this week.

Panthers Work Out Finnegan, Other CBs

With Charles Tillman out of action for the last two games, the Panthers have been a little short-handed in the secondary, and are searching for some potential help for their slot cornerback spot. A day after a Thanksgiving win over the Cowboys, Carolina brought in several free agent corners, including Cortland Finnegan, as Bill Voth of the Black and Blue Review details.

Despite the fact that Finnegan announced his retirement in March, the former seventh-round pick hired agent Drew Rosenhaus in the summer, and suggested he was open to an NFL return. At the time, Rosenhaus said that he was “working on teams” for Finnegan, who indicated a willingness to play either cornerback or safety. The 31-year-old has since auditioned for the Patriots.

In addition to working out Finnegan, the Panthers also brought in veteran cornerbacks Bradley Fletcher and Robert McClain for tryouts, according to Field Yates of ESPN.com (via Twitter).

Fletcher, who appeared in 71 games (54 starts) over six seasons for the Rams and Eagles, started the 2015 season in New England, but was released by the Patriots in October. McClain was also a Patriot before becoming a free agent, having been let go by Bill Belichick and company at the end of the preseason.

With no reports of signings yet, it appears the Panthers may just be getting the lay of the land for now, with an eye toward identifying the veteran cornerbacks they like in case it becomes necessary to add one.

There has been speculation the Ravens might try to talk wide receiver Steve Smith out of his plan to retire after the season or that Smith will change his mind. However, the veteran says that nothing has changed. “I’m on schedule for what I discussed earlier in the year,” the wide receiver said, according to Clifton Brown of CSNMidAtlantic.com.