Kawann Short is scheduled for free agency, but the odds are not in favor of him actually getting there. Panthers head coach Ron Rivera admits the Panthers “probably will have to tag” him, Adam Schefter of ESPN.com tweets. Since making those comments on ESPN, Rivera has clarified his comments, saying only that the tag is an option, not necessarily imminent (Twitter link via Joe Person of the Charlotte Observer). 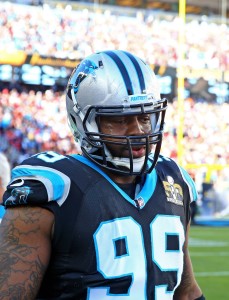 However, my feeling is that this a matter of semantics. The Panthers have likely already huddled up and decided that they will not let Short get near free agency. That means a franchise tag is in Short’s future if a long-term pact cannot be reached.

Short is ranked No. 3 on PFR’s most recent edition of the Free Agent Power Rankings. Unlike former teammate Josh Norman, Short is on record as saying he’s okay with signing the franchise tender.

Short, who turns 28 today, was the third-best interior defender in the league this season, per Pro Football Focus, and his 87.7 overall score was roughly in line with his 2015 mark, even though he had five less sacks. By PFF’s metrics, only defensive tackles Aaron Donald and Calais Campbell ranked ahead of Short in 2016.

Thanks to the deals signed last summer by Fletcher Cox and Muhammad Wilkerson, Short’s asking price has likely increased. Carolina would probably like to re-up Short at roughly $15MM per year on a multi-year deal, but it might take an AAV of ~$17MM or more to get something done based on how the market looks now.

Placing the franchise tag on Short should cost Carolina approximately $13.468MM in 2017.