The Saints are scheduled to work out veteran defensive back Tharold Simon on Friday, reports Nick Underhill of the Advocate (Twitter link).

Simon, 26, was once a five-game starter with Seattle’s Legion of Boom back in 2014, but he’s mostly been a bit part over the past two seasons. The former fifth-round draft selection played in just one contest with the Seahawks during the 2015 campaign, and then saw only 143 totals snaps with the Cardinals a season ago. Nearly half of those snaps were on special teams, which would be Simon’s area of focus with the Saints.

New Orleans was extremely poor on special teams in 2016 (27th in DVOA), and have since replaced their special teams coordinator, hiring Brad Banta to replace Greg McMahon. Per Football Outsiders, the Saints’ was particularly lacking on kick returns, as the club lost eight points of field position on such plays (30th in the NFL).

Of course, given New Orleans’ woes in the secondary, there’s always a chance Simon could earn playing time as a cornerback. First-round pick Marshon Lattimore and veterans Delvin Breaux and Sterling Moore are the only New Orleans corners with any sort of roster hold, so if injuries were to strike, Simon’s (admittedly limited) starting experience may appear comforting to defensive coordinator Dennis Allen.

Simon, 26, first made a name for himself as a rookie in 2014 with the Seahawks. In that season, he saw time in ten games and even made five starts. However, he was limited to just one game in 2015 and his 2016 deal with the Cardinals did not work out as planned. Last year, Simon appeared in nine games with Arizona but barely made a dent on the stat sheet with just five tackles.

Unlike former teammate Josh Norman, Panthers defensive tackle Kawann Short won’t have any problem signing the franchise tender if the team tags him, he told the Associated Press. “I wouldn’t fight it or anything,” said Short, who was unable to reach a long-term deal with the Panthers last offseason. On Norman, whom Carolina let go last April after he wouldn’t sign the tender, Short commented, “Me and Josh are not the same. … He could have stayed here if he wanted to. He could have (signed) the franchise tag.” The durable Short just wrapped up his fourth straight 16-game season, one in which the 27-year-old ranked as Pro Football Focus’ fourth-best interior defender and totaled six sacks. Placing the franchise tag on Short should cost Carolina approximately $13.468MM in 2017.

The Cardinals claimed cornerback Tharold Simon off waivers from the Seahawks, according to a source who spoke with Mike Florio of Pro Football Talk (via Twitter). Simon was waived by Seattle on Tuesday.

Simon, 25, has just eleven NFL games to his credit and he did not see action in the Seahawks’ season opener against the Dolphins. Though he only has ten career tackles, the Cardinals’ scouts believe that he can provide some depth for their secondary. Simon got a decent amount of burn in 2014 and also saw action in the postseason. In 2015, however, Simon suffered a painful dislocated toe injury that cost him the majority of the season. Simon has not been on the field for a regular season game in roughly one year.

In Arizona, Simon will join the team that knocked Seattle from the top of the NFC West last year. Going forward, Simon will try to make an impact as part of a cornerback group headed by superstar Patrick Peterson, Brandon Williams, Justin Bethel and Tyvon Branch. 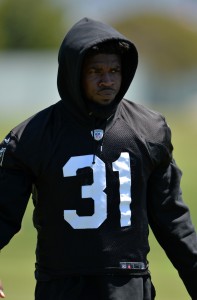