The Jaguars aren’t wasting any time in their coaching search. The team is interviewing Tom Coughlin today, sources tell Adam Schefter of ESPN.com (on Twitter). 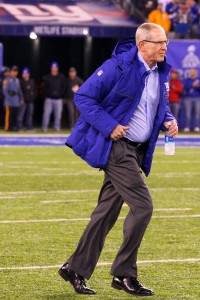 [RELATED: Coughlin Could Be A Candidate For Bills Job]

Coughlin, 70, has little interest in playing golf all day. After he parted ways with the Giants, he interviewed for head coaching vacancies with the Eagles and 49ers. He didn’t wind up taking either job, but he stayed involved this year with a job in the league office. This fall, he made it clear that he still wants to be a head coach in the NFL.

After canning Gus Bradley, GM Dave Caldwell told reporters that Coughlin would be a candidate for the job. If he isn’t hired as coach, the Jaguars would reportedly like to have Coughlin as a member of their front office. While Coughlin doesn’t have any formal NFL experience as an executive, he essentially acted as the Jaguars’ general manager during his head coaching run with the team from 1995-2002. One way or another, Jacksonville seems keen on a reunion.