The Browns have high grades on North Carolina quarterback Mitch Trubisky and are strongly interested in him as they search for a franchise signal-caller, according to Jason La Canfora of CBSSports.com. “They love him,” said one NFL scout. “Trust me, they love him.” 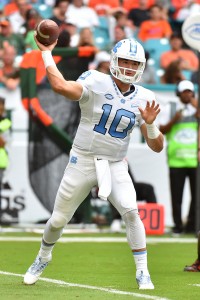 [RELATED: RG3 To Practice Next Week]

Cleveland does have already have three quarterbacks under contract for the 2017 season, but that won’t prevent the club from evaluating every option available in next year’s draft. Veterans Josh McCown and Robert Griffin III are candidates for release next year, and while third-round rookie Cody Kessler has been serviceable through seven starts, the Browns are still extremely likely to select a passer in 2017.

Trubisky, an Ohio native, will almost certainly be drafted in the top half of the first round, as he ranks as the sixth and 11th overall player on CBSSports.com and Matt Miller of Bleacher Report‘s respective big boards. Per La Canfora, the Browns staff was in attendance at UNC’s game on Saturday, and has done “extensive work” on Trubisky, who has completed nearly 70% of his passes this year for 25 touchdowns and four interceptions. Trubisky hasn’t been universally lauded, however, as one longtime former GM recently dismissed the North Carolina QB as simply a “one-year starter” who is buttressed by statistics.

The Browns aren’t the only team with a projected top-five pick that is looking into quarterbacks, as a recent report indicated that the Bears are researching Miami signal-caller Brad Kaaya.