After the Panthers fired head coach Matt Rhule, and especially after they traded away Christian McCaffrey, speculation has continued to swirl with respect to the Panthers’ other franchise players. At the top of that list is Brian Burns, whom the rebuilding team has held on to despite at least one substantial offer for the emerging pass rusher. 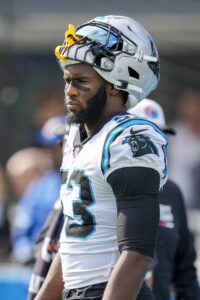 It was reported last week that Carolina received an offer of two first-round picks for Burns, as teams look to take advantage of the Panthers’ sell-off, and, more generally, the 2022 edge rush market. It was not known at the time which team submitted that sizeable proposal, but it has since been reported by SI’s Albert Breer that the Rams made a “substantial offer” for Burns.

ESPN’s Jeremy Fowler tweets that it is believed the defending Super Bowl champions were indeed the ones who put a pair of Day 1 selections on the table. That would fall in line with general manager Les Snead‘s well-known stance on draft picks, and, as Fowler notes, give the team a Von Miller replacement. Los Angeles sent second- and third-round picks to the Broncos for the latter last year, a move which helped earn the team the Lombardi Trophy.

Burns, 24, would certainly represent another major investment at the position, one with longer-term implications given his age. The Panthers have been very clear, however, that the Florida State product is one of a handful of franchise cornerstones who are highly unlikely to be moved. That, along with the fact that the Rams don’t own their 2023 first-rounder, would explain their reluctance to execute even a deal which would have greatly boosted their draft capital.

Fowler also notes that the Rams included maligned running back Cam Akers in their negotiations with Carolina. Akers has struggled to regain his form after last year’s Achilles tear, and his relationship with head coach Sean McVay has reached the point where both sides are eyeing a change of scenery.

With the door seemingly closed to Los Angeles being able to acquire Burns, their attention will presumably turn even more towards Broncos pass rusher Bradley Chubb. He heads the list of edge rushers believed to be available, and the Rams are among the teams thought to be most active in their pursuit of help at the position. In the coming hours, it will be revealed if they are successful in that endeavor.