After dangling Chase Claypool in trades this offseason, the Steelers will indeed move on from the former second-round pick. They reached an agreement to send Claypool to the Bears, Field Yates of ESPN.com tweets.

The Bears are paying up to see how Claypool will look in their offense, with Adam Schefter of ESPN.com adding Chicago will send Pittsburgh a second-round pick (Twitter link). Teams had heard Claypool was available for a third-rounder, per Albert Breer of SI.com, but multiple offers may have come in, as the Bears will part with a future second.

This trade transpired quickly, with the Pittsburgh Post-Gazette’s Gerry Dulac adding the Bears called on Claypool on Thursday morning (Twitter link). The Steelers will likely receive the higher of the Bears’ two 2023 second-rounders, noting (via Twitter) that Chicago’s original Round 2 choice (not the Baltimore pick obtained for Roquan Smith) will go to Pittsburgh. 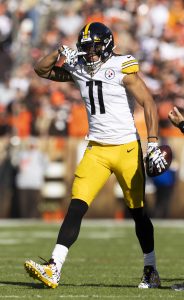 While Chicago has made two major seller’s trades over the past several days, the rebuilding team will have Claypool under contract beyond 2022. The big-bodied wide receiver’s rookie deal runs through 2023, giving the Bears a season and a half of potential evaluation time. The Bears let Allen Robinson walk this year and brought in a host of midlevel veteran options — trade acquisition N’Keal Harry among them — but Dan Graziano of ESPN.com adds the team had been searching for another wideout to work with Justin Fields (Twitter link).

Pittsburgh will move on from the Notre Dame alum, a move that is set to make second-round rookie George Pickens the team’s top complementary wideout. The Steelers have Pickens signed through 2025 and the recently extended Diontae Johnson locked down through 2024. These two will be the main pieces fostering Kenny Pickett‘s development, until the next Day 2 Steelers wideout arrives of course.

The Steelers added Day 2 receiving talent in 2017 (JuJu Smith-Schuster), 2018 (James Washington), 2019 (Johnson), 2020 (Claypool) and 2022 (Pickens). The organization has an extensive track record of finding and developing receivers, so collecting another asset for one not in the long-term plan makes sense. The Bears will pair Claypool with Darnell Mooney, whose rookie contract also runs through 2023.

At 6-foot-4, 238 pounds, Claypool is one of the biggest receivers in NFL history. He showed bright flashes as a Steeler, having exceeded 800 receiving yards in each of his first two seasons, but has also been inconsistent. The Canadian pass catcher came through for the team during its upset win over the Buccaneers, catching a go-ahead touchdown pass and multiple third-down tosses from Mitch Trubisky earlier this month. Through seven games, Claypool sits at 32 catches for 311 yards and one score.

This move stands to equip Fields with a 24-year-old No. 2 wideout. Chicago’s receiver strategy this offseason proved interesting, with Fields not exactly being set up with talent the way other young quarterbacks were. Third-round pick Velus Jones has three catches thus far this season, and the rest of Chicago’s receiving corps — Harry, Equanimeous St. Brown, Byron Pringle, Dante Pettis— consists of veteran retreads. In terms of additional draft capital, the Bears still have the extra fifth-round pick from the Smith trade, the 2023 fourth-rounder they acquired from the Eagles for Robert Quinn and 2023 sixth they grabbed from the Chargers for Khalil Mack.