3:43pm: The Bears will follow the Quinn formula with Smith’s contract. They will eat $4.8MM of the remaining $5.4MM on Smith’s deal, Schefter tweets. The Ravens’ cap situation made the Bears taking on some salary mandatory, but Chicago’s willingness to pay almost all of the money undoubtedly boosted the compensation value. Baltimore only owes Smith $575K the rest of the way.

2:29pm: Days after trading Robert Quinn to the Eagles, the Bears are making another seller move. They are sending contract-year linebacker Roquan Smith to the Ravens, Ian Rapoport of NFL.com reports (on Twitter).

Smith staged a hold-in effort during training camp but returned to the team and has played well. But the Bears had stripped away most of their front-seven pieces this offseason. Quinn’s departure followed, and Smith will complete a full-on overhaul. This move also comes not long after after a report indicated the Bears would likely hang onto Smith through the deadline. The Ravens stepped up since, and the Bears will collect an interesting haul for the Ryan Pace-era draftee. 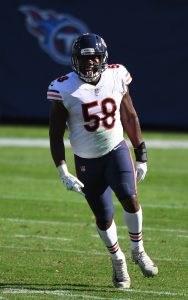 The Ravens are sending second- and fifth-round picks for Smith, according to ESPN.com’s Adam Schefter (on Twitter). Both picks are in 2023, Schefter tweets. Chicago will receive the higher of Baltimore’s 2023 fifths, Albert Breer of SI.com notes (on Twitter). The Ravens have their own 2023 fifth and the Patriots’. The Bears will also acquire veteran linebacker A.J. Klein in the swap, Rapoport adds (via Twitter). Klein signed with the Ravens earlier this offseason. The former Saints and Bills starter stands to provide a stopgap veteran presence for the Bears, who have dealt away considerable experience on defense this year.

This represents a nice return for a linebacker that would have been difficult for the Bears to cuff via the franchise tag. Because on- and off-ball linebackers are grouped together under the tag formula, Smith would require and edge rusher-level tag sum. The team will move on, and it has now added two second-rounders, along with fourth-, fifth- and sixth-round picks in deals involving Smith, Quinn and Khalil Mack this year.

The Smith move differs from the Quinn decision, as the former is a player squarely in his prime. The Ravens will acquire a fifth-year starter who is only in his age-25 season. Smith’s 30 tackles for loss between the 2020 and ’21 seasons ranked behind only T.J. Watt. This season, Smith leads the NFL with 83 tackles. During a brief run in Matt Eberflus‘ defense, the Georgia product has added 2.5 sacks. Pro Football Focus rates Smith behind Patrick Queen, Josh Bynes and Malik Harrison for 2022, but Baltimore’s trade certainly points to the organization not putting much stock in that placement. It will bet on the former No. 8 overall pick.

Smith is playing on a $9.74MM fifth-year option. The Bears ate most of Quinn’s salary to up the price tag from the Eagles; it will be interesting to see if the rebuilding team is doing the same with Smith. Otherwise, the Ravens will be responsible for more than $5MM of Smith’s Year 5 salary. Baltimore entered Monday with less than $3MM in cap space, so a salary arrangement — or a Ravens cap adjustment — will be necessary for the team to acquire Smith. 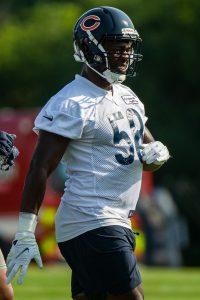 The Ravens have Queen signed through 2023, with a fifth-year option on the table to keep him on his rookie deal through 2024. Will Queen be playing alongside a big-ticket Smith extension next year? The Ravens making this move now would suggest they are prepared to extend Smith.

Baltimore made Bobby Wagner a competitive offer this year, signaling a willingness to pay up at the position, and attempted to keep C.J. Mosley from defecting to the Jets in 2019, but a record-smashing contract nixed those hopes. The Ravens have not spent big at this position in the years since, with Queen being their top 2020s investment at the position. Smith could change that, having been seeking a deal that eclipses Shaquille Leonard‘s $19.7MM-per-year contract. Seeing the Ravens go to such a place would be interesting, but the other Raven currently on a fifth-year option complicates their Smith path.

Lamar Jackson‘s status also makes Smith an interesting Ravens trade piece. Unless the Ravens and their superstar quarterback agree to terms on an extension before the March franchise tag deadline, the former MVP will be tagged. That takes a key option away from the team re: Smith, who is scheduled to hit free agency when the 2023 tampering period opens. Like Jackson, Smith does not have an agent.

For now, however, the Ravens are giving first-year defensive coordinator Mike Macdonald a major piece to upgrade a defense that ranks 24th in yards allowed and 20th in scoring. Smith will return to a 3-4 defense in Baltimore, after playing in 3-4 schemes for Vic Fangio, Chuck Pagano and Sean Desai. It will be interesting to see how the three-down linebacker looks with the Ravens, who will lead the AFC North regardless of the Bengals’ result Monday night.

The Bears drafted starting safety Jaquan Brisker with the second-round pick obtained for Mack, who joined Akiem Hicks, Eddie Goldman and Danny Trevathan in being replaced by a new Bears regime this offseason. The Bears entered Week 8 coming off an upset blowout of the Patriots, but they were routed in Dallas on Sunday. GM Ryan Poles has not let early-season wins over the Patriots and 49ers cloud a long-term plan, and he will have more to work with in the 2023 draft because of this seller’s approach.

45 comments on “Ravens To Acquire Roquan Smith From Bears”