John Ross reiterated his request to be traded Friday, and the Bengals may be attempting to accommodate the disgruntled deep threat. 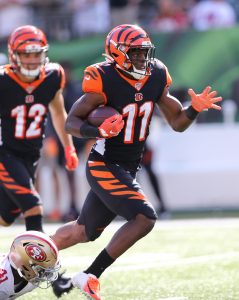 The Bengals, who have made Ross a healthy scratch at times this season, have made calls on the fourth-year wide receiver, Tyler Dragon of the Cincinnati Enquirer tweets.

He of a Combine-record 4.22-second 40-yard dash, Ross is listed as questionable with an illness for Sunday’s Bengals-Titans game. Ross disputed this designation, indicating (via Twitter) he is healthy and dissatisfied with his role. Ross has just two catches for 17 yards this season.

Cincinnati has already unloaded Carlos Dunlap after his weeks-long dissatisfaction spree, and the team is covered at wide receiver. The Bengals have used A.J. Green, Tyler Boyd and second-round pick Tee Higgins as their top three wideouts. Auden Tate, who came up in trade rumors after being a healthy scratch earlier this season, also still resides on the Bengals’ roster. Tate is controlled beyond 2020; Ross is not.

Despite the Dunlap deal, however, the Bengals are not known for aggressiveness in trades. The rebuilding team is not willing to deal 11th-year defensive tackle Geno Atkins, and Sirius XM Radio’s Adam Caplan threw cold water on the prospect of a trade. The Bengals would rather let Ross walk in March than deal him now, per Caplan (on Twitter). Teams are interested in Ross, per Caplan, which would make an anti-trade stance rather confusing.

Ross’ injury troubles led the Bengals to pass on his fifth-year option. The ex-Washington Husky, however, has shown intermittent promise. He caught seven touchdown passes in 2018 and surpassed 500 receiving yards in eight games last season. This and his elite speed would make Ross an interesting trade chip ahead of Tuesday’s deadline.