The Jets have signed tight end Tyler Kroft to a one-year deal, per an announcement from his agent. Kroft, a former third-round pick of the Bengals, has spent the last two seasons with the Bills. 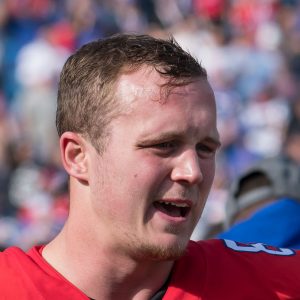 The Rutgers product will be about an hour-and-a-half away from his old stomping grounds with a real opportunity for targets. Chris Herndon isn’t necessarily locked in as Mike LaFleur‘s top tight end, which opens the door for Kroft.

Kroft did his best work with the Bengals, particularly in 2017 when he totaled 42 catches, 404 receiving yards, and seven touchdowns. That year helped propel him towards a three-year, $18MM free agent deal with Buffalo. He hasn’t come close since, but he did manage 12 grabs for 119 yards and three touchdowns last year.