Depending on who you ask, the Saints might be willing to trade Michael Thomas before the deadline. The wide receiver’s camp is working to find potential deals but, so far, the Saints have yet to receive a concrete offer for the superstar, according to PFT’s Mike Florio. 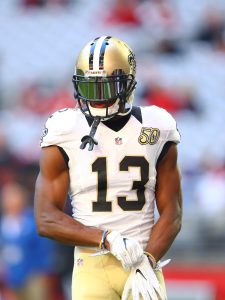 Thomas’ talent is undeniable, but his contract stands as a major hurdle. A Thomas trade would lead to a $20MM cap charge in 2021, a hit that would be compounded by Drew Brees‘ potential $22.65MM hit. If Thomas gets traded and Brees retires, the Saints would be left with $42.65MM in dead money for two players that are not on the roster.

Thomas inked a massive five-year, $100MM extension in July of 2019 that made him the highest-paid receiver of all time. Lately, he’s been at odds with the team, including a Week 5 benching for an altercation with teammate Chauncey Gardner-Johnson during practice. He’s also been limited due to injuries, including a high ankle sprain and a hamstring issue.

All in all, Thomas has appeared in just one game for New Orleans this year, giving him a stat line of three catches for 17 yards. There’s still reason to believe that Thomas can duplicate last year’s production, though he won’t match the stat line. In 2019, Thomas finished with a single-season-record of 149 receptions to go along 1,725 receiving yards and nine touchdowns.

22 comments on “No Trade Offers For Saints’ Michael Thomas?”