The Jaguars have placed wide receiver Jamal Agnew on the injured reserve list, per a club announcement. There’s no official word yet, but his hip injury will likely rule him out for the rest of the year. 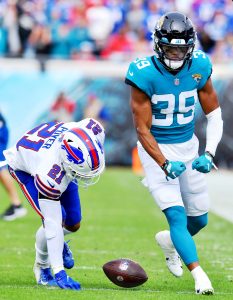 Agnew suffered the injury during the fourth quarter of yesterday’s loss to the Niners. It looked to be serious right off the bat — Agnew’s leg twisted as he was tackled following the three-yard catch. It’s a bad blow to the Jaguars, since Agnew has been one of their most impactful playmakers this season.

Agnew has registered seven return touchdowns since 2017, more than any other player in the NFL. Two of those have come this year — he housed a 102-yard kickoff in Week 2 and returned a botched field goal try for a record 109-yard TD in Week 3. He’s also played a significant role on offense. Just last week, he scored a 66-yard rushing touchdown against the Colts. Meanwhile, as a receiver, he has a 24/229/1 line for the year.

The Jaguars will replace Agnew on the 53-man roster this week, but they’ll be hard-pressed to replace his production. Head coach Urban Meyer may need other reinforcements too, since left tackle Cam Robinson and cornerbacks Shaquill Griffin and Tyson Campbell were also banged up on Sunday.