Baltimore’s 2021 NFL season was mired with injuries that would lead key players to be absent for extended periods, including many that missed all or the majority of the year. The Ravens aren’t known for giving out too much information on injuries over the years, but The Athletic’s Jeff Zrebiec was able to provide an update on some of Baltimore’s rehabbing players.

Outside linebacker Tyus Bowser signed a four-year contract to stay with the Ravens after the 2020 season and rewarded Baltimore with his best season as a pro to date. Bowser started every game of the year for the first time in his career and tallied career-highs in total tackles (59), sacks (7.0), tackles for loss (8.0), quarterback hits (15), and forced fumbles (2) just a year after recording three interceptions. The season ended on a sour note for Bowser, though, when he tore his Achilles tendon during the Ravens’ season finale against the Steelers.

As for a return, it was an extremely positive sign when Bowser came into the team’s offseason workouts without a boot or a limp only three months after surgery. Historically, Achilles tears take from nine to twelve months to come back from, but, recently, the Rams saw running back Cam Akers return to the field after only five and a half months of recovery. Baltimore, themselves, saw former star linebacker Terrell Suggs return to play only five months after surgery to repair his Achilles. The season opener would mark about eight months from Bowser’s surgery. Head coach John Harbaugh was quoted back in January saying, “I think Tyus will be back for the start of the season. I think Tyus will be back for training camp. That’s my prediction. That’s my timeline, so I’m going to stick with that.”

Here are a couple more notes from last year’s last-place team in the AFC North:

Defensive tackle Broderick Washington was the 170th player selected in this year’s NFL Draft. Today, he became the first place to formally sign his rookie deal, per an announcement from the Ravens. 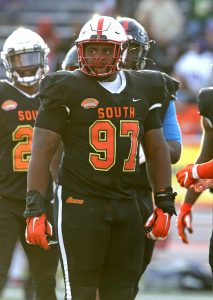 The Texas Tech product will receive a four-year pact worth roughly $3.6MM, according to Over The Cap‘s slot estimates. For reference, Ravens first-round linebacker Patrick Queen – taken with the No. 28 overall pick – is set to earn $12.16MM over the same four year period. And, in case you were wondering, No. 1 overall pick Joe Burrow will collect $36.2MM on his rookie deal with the Bengals.

Washington was taken two rounds after Texas A&M’s Justin Madubuike to further strengthen the Ravens’ interior line. The Ravens see the 6’2″, 305-pound lineman as a solid run stuffer who can help them beef up in the trenches.

With Washington signed, we’ll be waiting on the signings of 254 more NFL Draft picks. To spare your Twitter feed, we’ll group most of these signings in daily posts here at Pro Football Rumors. For first-rounders and other notable signings, we’ll provide a more detailed breakdown.