The Ravens will be without their No. 1 wide receiver for the rest of the season. Rashod Bateman will undergo surgery to repair a Lisfranc issue, John Harbaugh said Thursday (via ESPN.com’s Jamison Hensley, on Twitter).

This foot operation is expected to sideline the second-year receiver for this campaign’s remainder. Bateman had missed Baltimore’s Week 5 and Week 6 games, before returning to play in the team’s most recent two contests. This will be a tough blow for the AFC North-leading team. 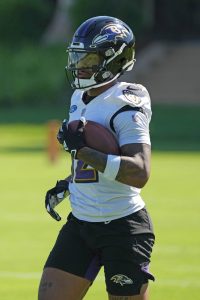 Bateman aggravated his foot injury during the Ravens’ Week 8 win over the Buccaneers. This setback was only supposed to cost him multiple games; an IR stay was not yet certain prior to today. Instead, an already-thin Ravens receiving corps will need to get by without the player drafted to be its anchor.

Baltimore played without Bateman for five games to start the 2021 season, after the Minnesota product suffered a groin injury during training camp. But the 2021 first-round pick still re-emerged as a key target down the stretch for Lamar Jackson and Tyler Huntley. Bateman caught 46 passes for 585 yards and a touchdown. He already has two scores this season and has far exceeded his rookie-year yards-per-catch figure, but the 19-yard number will end up being final.

While Bateman still stands to be a big part of the Ravens’ long-term future, he will end this season with 18 career missed games. The Ravens moved to draft Bateman 27th overall last year, prioritizing him over an outside linebacker need. Baltimore had both Gregory Rousseau and Odafe Oweh rated closely that year, so the team preferred Bateman’s value with its initial first-round pick and ended up with Oweh — who went one spot after Rousseau — three spots later.

The Ravens resisted calls to augment their receiver situation this offseason, going into the year with Bateman and Devin Duvernay as their top targets. None of Baltimore’s auxiliary presences have made much of an impact thus far, leading the team to sign DeSean Jackson. The historically productive deep threat has battled extensive injury troubles in the recent past as well, but he bounced back with a solid health stretch last year. Jackson, 35, will likely make his Ravens debut Monday night against the Saints.