This is especially notable considering Joe Judge‘s assertion throughout the offseason that the organization would re-sign Ebner once he was ready to return to the team. Initially, Ebner was away from the team as he pursued a trip to the Olympics with the USA rugby squad, but he announced that he was withdrawing from contention back in June. That seemingly opened the door for his return, but it’s been a month-plus without any developments.

Nate Ebner won’t be heading to the Olympics after all. The veteran free agent announced today that he’s no longer competing for a spot on the USA rugby squad, thus taking him out of contention for the summer games. This opens the door for the Giants to finally re-sign Ebner. 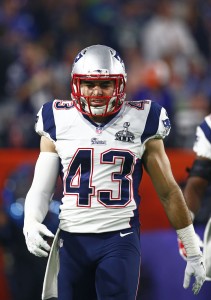 Ebner previously played on the United States’ Under-19 and Under-20 national rugby teams, and he was a member of the rugby sevens squad that represented the country at the 2016 Summer Olympics. Ebner is also a co-owner (along with former teammate Patrick Chung) in a Major League Rugby team.

“It pains me to announce my withdrawal from competing for a spot at the Tokyo Olympics with the USA Men’s Sevens,” Ebner said in a social media message (via Paul Schwartz of the NY Post). “After the 2020 NFL season, I had an injury that required off-season surgery. While my recovery is on track for the next football season, unfortunately the time tables did not align with trials for the Games.’’

Nate Ebner followed Joe Judge from the Patriots to the Giants last season, signing a one-year deal in March 2020. He is on track for a second season in New York.

Although the veteran special-teamer remains a free agent, Judge said he intends to bring him back for a second season, per ESPN.com’s Jordan Raanan (on Twitter). Ebner, 32, is currently participating in a different sport that will occupy his time for a bit.

The Ohio native is training to be part of Team USA’s rugby squad for the Tokyo Olympics this summer. Ebner participated in the 2016 Rio Games, when the Patriots granted him the opportunity to make that team, and suited up for 19 games as part of New England’s Super Bowl champion outfit that year. The expectation this time around is Ebner re-signs with the Giants after the Olympics conclude, Raanan notes. These Games, which the COVID-19 pandemic delayed by a year, will run from July 23-August 8.

Ebner played 16 games for the Giants last season, logging 332 special teams snaps (81% of Big Blue’s special teams plays). The 2021 season would be the former sixth-round pick’s 10th in the NFL.

The Giants have agreed to sign special teams ace Nate Ebner, according to NFL.com’s Ian Rapoport (on Twitter). Ebner is just the latest free agent to depart from the Patriots and he’ll find a familiar face in head coach Joe Judge when he arrives in New Jersey.

Ebner, who has a background in rugby, has been with the Pats since 2012. He voiced a desire to stay but, ultimately, the two sides weren’t able to come to terms on a new deal.

“That would be the best thing, I think, when you consider my entire career has been here,” Ebner said recently when asked about the possibility of re-signing. “I’ve got some true friendships here. … But right now it’s out of my hands, so we’ll see what happens.”